The Young and the Restless Spoilers: Is Stitch Killed in Newman Ball Explosion, Sean Carrigan Contract Not Renewed, Exits Y&R? 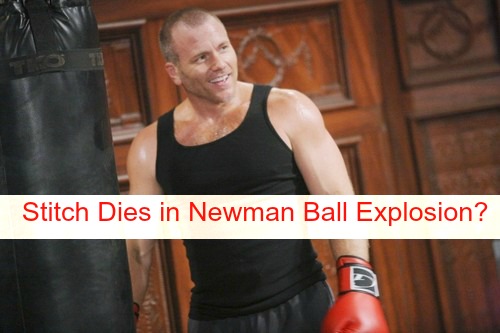 “The Young and the Restless” spoilers are in and a new report we learn that Dr. Ben ‘Stitch’ Rayburn (Sean Carrigan) could be leaving the CBS soap opera. Rumors of his departure have been swirling on the internet for quite some time.

Soaps in Depth reported in the October 19 edition that Stitch is possibly leaving next month after his contract ends. The network has neither confirmed nor denied Sean Carrigan’s rumored departure. Would you like to see Sean sign a new contract or do you think it is time for him to leave the CBS daytime soap opera?

Stitch hasn’t had a compelling storyline in six months or more. Last year, he signed on for another year contract when he was resolving Victoria’s (Amelia Heinle) newborn daughter’s paternity. Ever since it was determined that Katie’s father was Billy Abbott (Burgess Jenkins), Stitch’s storylines became few and far between. It seemed like over the past six months; he has become a filler person with not much of a storyline.

A few months ago, it was revealed that Stitch could die in November sweeps. Chuck Pratt Jr. has made it clear that there would be an explosion and a major character will die – and he’d die saving key characters on the show. Many fans brushed it off as just another wild and crazy rumor, but it appears more information has been leaked about November sweeps storylines. Chuck Pratt was pretty explicit when he revealed that during the annual Newman Ball, there will be an explosion. “At least four people will die, with one being a key contract character.”

Apparently, one of the biggest storylines planned in November sweeps is an explosion at a Newman gala. The spoiler revealed that a few characters would die, one while saving a main character. That leads CDL to believe that the Sean-gone rumor may be correct. Sean’s departure will leave fans upset – Stitch is a well-loved character – a fan favorite.

Do you think Stitch will leave the show as a hero? Will he save one of the Newman in the gala explosion? As soon as CDL learns the final offical status of his contract, we will update the “Young and the Restless” fans. Don’t forget to check back later for all your “The Young and the Restless” news, gossip, and spoilers!