The Young and the Restless (Y&R) Spoilers: Abby Gets Pregnant While Stitch and Ashley in Love and Hooking Up? 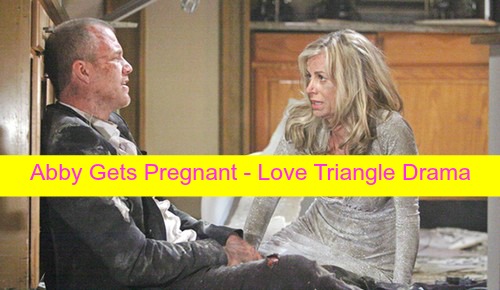 “The Young and the Restless” (Y&R) spoilers tease that Ashley [Eileen Davidson] and Dr. Ben “Stitch” Rayburn [Sean Carrigan] will not be able to stay away from each other. That’s not all either; the spoilers are predicting that Abby Newman [Melissa Ordway] will find herself pregnant and will be blind to the fact that her mother and fiancée are madly in love. What a mess this will be for poor Abby Newman or is it karma after all the cheating she has done!

Abby seems to have the worst luck when it comes to men. It wasn’t but a year ago that Genoa City learned of Abby’s forbidden love affair with her niece’s husband, Austin [Matthew Atkinson]. After his death, she had a hard time dealing with betraying Summer [Hunter King] by sleeping with her husband and felt targeted by the cabin murderer – who attacked her in Chancellor Park.

After the cabin murder was solved, Abby told Stitch that he didn’t have to be her bodyguard anymore- something that he enjoyed. Abby and Stitch ended their relationship after not being on the same page Stitch wanted her to work less; it fueled a huge showdown at the hospital.

Stitch asked her to go grab a cup of coffee with him one day, which rekindled their romance – and prompted the duo to get back together. Before he proposed marriage to her, he asked Ashley if it was okay with her if he married her daughter. Ashley was taken back and told him, “It wasn’t that long ago that he was telling her he couldn’t stop thinking about her. And, now you want to marry my daughter?”

After some time, Ashley agreed that she would give them her blessing to marry. Stitch hugged her and swore he’d make Abby a happy woman. Ashley looked concerned because she is not over her feelings for the handsome doctor.

Stitch asked Abby to marry him, and she agreed to marry him without hesitation. She immediately began to talk about the wedding and all the things she wanted for her ceremony. Stitch seemed perfectly fine to allow Abby to take control of the plans while he sat in the sidelines.

Stitch and Ashley were trapped together during the fiery blaze on Halloween. While trapped in Newman building, Stitch told Ashley that he was in love with her and cannot stop thinking about her. The two shared a moment and kissed. The kiss meant more than they are letting on because since then they cannot stop avoiding speaking of the incident!

After he was saved by Adam [Justin Hartley], Stitch told Ashley he wanted to call off the wedding and tell Abby about his feelings for her. Ashley told him he could NOT do that to Abby. She told him they were just scared in the fire, and the kiss meant nothing. Ashely insisted things are exactly like they are supposed to be – he is to marry her daughter.

Stitch reluctantly agrees to her demands. Ashely leaves the hospital room, and sobs – she cries for the relationship with Stitch that she has longed for for over two years!

The spoilers tease that next week, November 16 – 20, Ashley and Stitch will find themselves in a compromising position. It seems to be implying that the duo will continue to see each other- even sleep together, while Abby plans the lavish Newman wedding.

The down-the-road spoilers indicate that Abby will receive life-changing news, which implies that she COULD find out she is pregnant. The rumor mill has been speculating for months that she would end up knocked up, but so far it has not been announced. Is it possible that she will end up pregnant while her mother is sleeping with her fiancée behind her back?

Fans are hoping that the wedding never takes place. Their relationship feels forced and unnatural. Many fans felt that Stitch looked like her father more so than her fiancée. However, TPTB write the storyline, it looks like it will head towards another love triangle with either the parent or child getting hurt all in the name of love.

Do you think that Stitch and Abby will get married? Could Abby find out she is expecting a child while her mother is sleeping with her fiancée? Don’t forget to come back later for juicer “The Young and the Restless” spoilers, rumors, and updates!