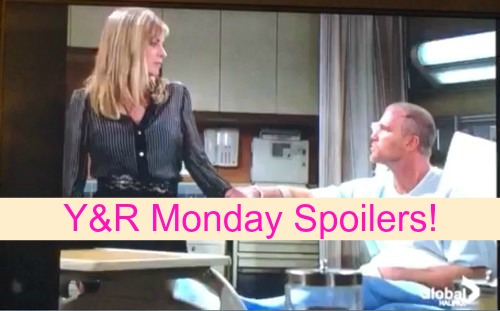 “The Young and the Restless” (Y&R) spoilers for Monday, November 16, tease that Stitch (Sean Carrigan) won’t be able to shake his feelings for Ashley (Eileen Davidson). Stitch has been fighting his desires for a long time, but all of that changed when he was trapped with Ashley in the fire at Newman Enterprises.

They both declared their love and shared a steamy kiss. Once Stitch woke up in the hospital, he knew which woman he wanted to be with and it certainly wasn’t his fiancée. Unfortunately, that’s exactly why Ashley thinks they can’t be together.

Abby (Melissa Ordway) would be devastated if Stitch called off their engagement and she’d be even more devastated if she knew her own mother was the reason. Monday’s preview video shows Stitch grabbing Ashley’s arm as he urges her to reconsider.

Stitch will suggest that Ashley is running from this possible relationship because it makes her feel good. Feeling happy at her daughter’s expense would be a big problem for Ashley. Nevertheless, Ashley could end up throwing Abby under the bus if Stitch keeps pouring his heart out.

Meanwhile, Jack (Peter Bergman) will schedule a meeting with Senator Moxley (Jack Armstrong), who is the husband of the judge on Adam’s (Justin Hartley) case. It seems Jack isn’t the only one with that idea.

“The Young and the Restless” spoilers say Victor (Eric Braeden) will already be talking to the senator when Jack shows up. What does Victor have up his sleeve? Time will tell, but Y&R rumors hint that Victor will use his typical tricks to get Adam off the hook.

At the hospital, Judge Moxley (Jensen Buchanan) will pop in to see Adam. The judge will give Adam updates on his appeal and let him know that his fate rests in her hands. Adam will look concerned, but he probably doesn’t have too much to worry about. In Friday’s episode, Adam agrees to go along with Victor’s deal.

As long as Adam is willing to play by Victor’s rules, there’s a good chance things will work out in his favor. However, Adam may find that his freedom comes at a steep price. Stick with “The Young and the Restless” to see if Victor will cause issues for Adam down the road.

So Y&R fans, what do you think about the news that Stitch isn’t giving up on Ashley? What’s Victor’s game with the senator? Will Adam win his appeal thanks to Victor’s efforts? What will their deal mean for Adam’s future? Let us know what you think in the comments below and don’t forget to check CDL often for the latest “Young and the Restless” spoilers, rumors, updates and news.