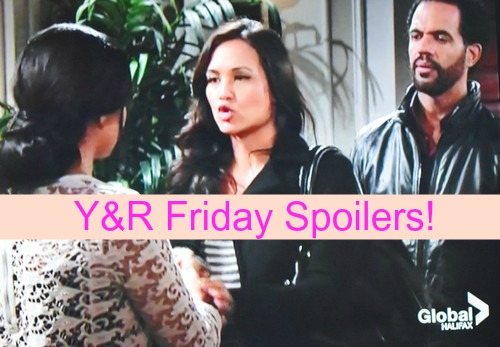 “The Young and the Restless” spoilers for Friday, November 13, tease that Michael (Christian LeBlanc) will learn that a harsh judge named Elise Moxley (Jensen Buchanan) will be over Adam’s (Justin Hartley) appeal.

Michael will give Nikki (Melody Thomas Scott) and Victor (Eric Braeden) updates on the decision. Nikki and Victor will indicate that they know Judge Moxley. Apparently, Moxley has some sort of beef with them. Victor will suggest that everything will be fine, but Nikki will be concerned.

Judge Moxley will talk to Christine (Laralee Bell), who will be thrilled with the news that she’s on the case. Moxley will insist she isn’t happy that Chris set this up. Christine will reply that she didn’t, which will lead Judge Moxley to suspect someone else.

At the hospital, Jack (Peter Bergman) will warn Adam that he should be prepared to go to prison. The appeal may not work out. They’ll discuss the possibility of Victor helping Adam. Jack will believe Victor won’t come to Adam’s aid unless there’s something in it for him.

Later, Jack will find Victor and ask questions about what he wants. Victor will pretend he’s a doting daddy and state that he’s simply helping his son. Nikki will track down the judge to confront her about the issue between them. Judge Moxley will say they’re all good, but she’s recusing herself from the case anyway. Nikki will wonder why, but the judge won’t offer any details.

Victor will walk in and suggest that Moxley should stay on it. Victor will believe Judge Moxley would be fair and make the right decision. Once she exits, Nikki will tell Victor that Judge Moxley is scared of him.

Victor will head over to Adam’s hospital room and they’ll talk about their potential deal. Adam will think Victor plans on telling Chelsea (Melissa Claire Egan) about the paternity issue if he doesn’t agree to his terms. Plus, Adam will likely go to prison without Victor’s intervention.

Victor will indicate that he just wants to rebuild his company with his son. Adam will worry about Jack, but Victor will demand to know if they have a deal or not. Adam will agree to go along with Victor’s scheme.

Meanwhile, Jack will speak with Nikki about the judge. Nikki will wonder if Victor has anything on Judge Moxley’s husband, Senator Moxley. It looks like Nikki is catching on. Y&R rumors hint that Jack will try to talk to the senator, but Victor will make it to him first. Victor is always one step ahead of the game.

Other “Young and the Restless” spoilers say Gwen (Nadine Nicole) will fear that Hilary (Mishael Morgan) will squeal on Neil (Kristoff St. John) now that she knows the truth. Neil will be more worried about Dylan (Steve Burton), who is bound to go after Dr. Neville (Michael E. Knight).

At the lake house, Hilary will look around and sense that Neil cared for her. Devon (Bryton James) will recap Neil’s accident and Hilary will hate that she cheated on Neil while he was blind. Devon will try to reconnect with Hilary, but she’ll tell him to get lost. Hilary will insist that she’ll run away for good if Devon doesn’t back off.

Hilary will head back to her suite and Neil will want to talk to her. Neil will push Hilary to take the medication Dr. Neville prescribed so she can remember everything. That seems to be a problem for Hilary. Since Hilary loves Neil, she doesn’t want the drugs to make her fall for Devon again. Neil will say Hilary should take the pills so she can get better.

Downstairs at the bar, Gwen will join Devon and start ranting about Hilary’s manipulation. Devon won’t like her trashing Hilary, but Gwen will be ready to go to war. Gwen will suggest she’s not giving Neil up without a fight. Stick with the CBS soap to see if Gwen will be able to get Hilary out of the picture.