The Young and the Restless (Y&R) Spoilers: Where is Sharon and Adam’s Love and Friendship – Is Shadam Dead? 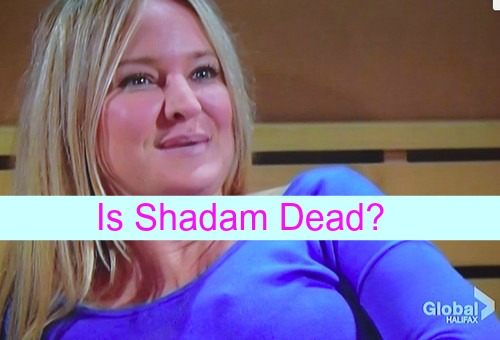 “The Young and the Restless” (Y&R) spoilers are in; fans have been confused why TPTB have erased Sharon Newman [Sharon Case] and Adam’s [Justin Hartley] powerful connection to each other. Before Justin stepped into the role.

Sharon and Adam were a force together; a bond that was stronger than Chelsea [Melissa Claire Egan] and Adam ever had. So why suddenly had the writers wanted to erase the bond they build over the past four years? Why does Adam act like he never had a ‘thing’ with Sharon?

Before Chelsea Lawson arrived in Genoa City and set her sights on Adam; there was Shadam [Sharon and Adam]. Sharon and Adam were an unlikely duo, that found comfort in each other’s arms over and over.

At first, Nick [Joshua Morrow] was extremely upset at the pairing; after all, Adam did tell Sharon that Faith died at birth, while he handed sweet newborn Faith to Ashley [Eileen Davidson] to raise as her own child. After some time, most everyone warmed up to their strange attraction to each other.

In 2014, Sharon’s bipolar was spiraling out of control; and she was behaving in a very erratic way. Not even, her good friend Adam could understand her. Adam had told Chelsea that he loved her, and would feel obligated to help Sharon every time she called. Chelsea wasn’t sure she could believe him because she felt the connection Sharon had to Adam was more powerful than hers.

When Sharon lashed out at the Victor by lighting the Newman Ranch on fire; Adam stood by her again. Adam hid Sharon and protected her from the Newman backlash. He hid her from Chelsea too. Chelsea found out Adam hid her, which landed him in hot water with Chelsea again. The one thing Adam knows – as well as Sharon – is being on the outs with the Newman’s can be a painful existence.

Adam returns to Genoa City as Gabriel Bingham after he supposedly died in the car. Adam tests his newfound identity on Sharon. Adam approaches her in the coffee shop, and she sensed she knew him from somewhere, but couldn’t place where? She said, “There’s something oddly familiar about you. I feel at ease with you, Mr. Gabriel Bingham.”

It seems like, since his return, TPTB are hell-bent on erasing his connection to Sharon. She is tucked away in the mental institution – the same one in which she lost Faith in 2009. She still hasn’t been told Adam is alive, nor has Adam mentioned her in any way.

Erasing their history is a questionable writing decision of Chuck Pratt, Jr. Fans of the show remember how powerful their love was and how far they’d go for each other. Sharon would at no time turn Adam in – even if she thought he killed someone. Sharon never turned her back on him and easily forgave him for kidnapping her baby [Faith].

Will Adam ever show any concern for Sharon again? Have TPTB decided to erase their relationship from the memory of the fans? Justin Hartley recently said in an interview that he told the writers that he preferred to be with Chelsea on screen.

Is it possible that TPTB are allowing the handsome hunk to dictate Adam’s love interests and storylines? Don’t forget to come back later for more juicy “The Young and the Restless” spoilers, rumors, and news!