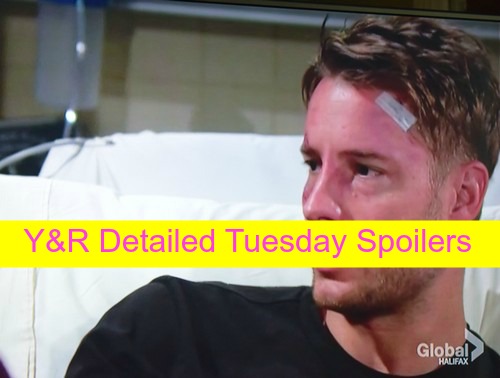 “The Young and the Restless” spoilers for Thursday, November 12, tease that Chelsea (Melissa Claire Egan) will try to comfort Nick (Joshua Morrow) as he deals with the loss of his son. Nick will feel like Sage (Kelly Sullivan) is pushing him away, but Chelsea will suggest that she’ll come around in time. Christian’s death has been difficult to accept.

In Adam’s (Justin Hartley) room, Victor (Eric Braeden) will hint that there was some manipulation going on with the paternity test. Adam will deny it and insist that he’s just trying to be sympathetic. Nick and Sage have been through a lot. Victor will indicate that he wouldn’t want to make things any tougher on them by revealing his suspicions.

The subject will change to Newman Enterprises. Victor will want Adam to help him rebuild the company. Adam will realize that Victor is planning a scheme that could hurt the Abbotts. Victor will imply that Adam has to do this if he wants to get out of his prison sentence.

Chelsea will walk in and wonder what they’re discussing. Victor will head out and Adam will say they were talking about his appeal.

Elsewhere, Dylan (Steve Burton) will mull over what he knows about Hilary’s (Mishael Morgan) disappearance and the drugs that were in her system. Dylan will ask if Emma (Alice Greczyn) knows about a doctor who could’ve prescribed that particular mix.

Emma will talk about Dr. Neville (Michael E. Knight) and how he was fired in the middle of a controversial experiment.

Other “Young and the Restless” spoilers say Neil (Kristoff St. John) will take a big risk by telling Hilary the truth. Neil will spill the whole story about the phony cheating video and his plot for revenge. Neil will admit that he followed Hilary to the island and argued with her on the summit.

Hilary will be shocked by what she’s hearing. Neil will say he didn’t mean for Hilary to get hurt and he saved her when she fell. That won’t mean much to Hilary. She’ll order Neil to get out.

Dr. Neville will meet up with Gwen (Nadine Nicole) in the park and remind her that it’s crucial for Hilary to finish her treatment. If Gwen doesn’t take care of this, there could be side effects and Hilary’s life could be in danger. Later, Neil will see Gwen and let her know he came clean to Hilary. Gwen will give Neil the prescription and suggest that Hilary won’t remember anything without it.

Neil will run into Dylan and realize he got updates on Dr. Neville. There could be trouble if Dylan gets to Hilary before Neil. Meanwhile, Devon (Bryton James) will try to reach out to Hilary again, but she’ll say she can’t trust anyone right now. Hilary will head to the lake house and Devon will follow her. Devon will approach Hilary and ask why she chose to go there.

At home, Sage will grieve over Christian’s death. Faith (Alyvia Alyn Lind) will rush in and excitedly mention her baby brother. Sage will gather up the courage to break the news, but Nick will arrive to do it for her. Faith will seem distressed and head off to draw a picture.

Nick will pull Sage close as they try to cope. Y&R rumors hint that Nick and Sage’s emotional upheaval is far from over. Stick with the CBS soap to see what the future holds for this couple. Voice your opinion in the comments below and don’t forget to check CDL often for the latest “Young and the Restless” spoilers, rumors, updates and news.