The Young and the Restless (Y&R) Spoilers: Michael’s Bad News for Adam’s Appeal – Nikki Rats Out Victor to Jack 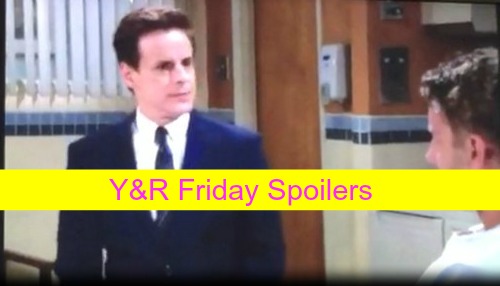 “The Young and the Restless” (Y&R) spoilers for Friday, November 13, reveal that Victor (Eric Braeden) could be up to his old tricks. In Thursday’s episode, Victor hints at his plans to cause trouble for the Abbotts and tries to get Adam (Justin Hartley) on board.

Nikki (Melody Thomas Scott) knows Victor better than anyone and she might be catching on to Victor’s potential scheme. Friday’s preview video shows Jack (Peter Bergman) asking Nikki what Victor’s up to this time. Whatever Victor has in store, it’s bound to create chaos as usual.

Meanwhile, Adam will get updates from Michael (Christian LeBlanc). “The Young and the Restless” spoilers say Michael will announce he has some bad news and Adam needs to take it seriously. It looks like Adam’s chances are slim when it comes to reversing the verdict. Of course, we all know that it doesn’t take much to exonerate a Y&R character, especially one that’s as handsome and beloved as Adam.

Nevertheless, Adam may have to make a deal with Victor if he wants to secure his freedom. Victor usually manages to keep the upper hand in almost any situation. If Adam wants to stay with his family, he may have to throw Jack and the rest of the Abbotts under the bus. It’s just another moral dilemma for Adam to wrestle with.

Elsewhere, Christine (Laralee Bell) will be thrilled when she learns about the judge who will be making a decision on Adam’s appeal. “The Young and the Restless” spoilers tease that Christine will insist she couldn’t ask for a more qualified judge to hear the case.

However, the rumors suggest that Adam may manage to get off the hook in spite of all the obstacles. Perhaps something will actually go Adam’s way for once, especially if The Moustache is in his corner. Stick with the CBS soap to see if Adam will finally get some good luck.

So Y&R fans, what do you think about Victor’s attempt to stir up trouble again? What will Nikki have to say on the matter? What about Adam’s uphill battle to stay out of prison? Will Victor help Adam get out of this mess? Let us know what you think in the comments below and don’t forget to check CDL often for the latest “Young and the Restless” spoilers, rumors, updates and news.