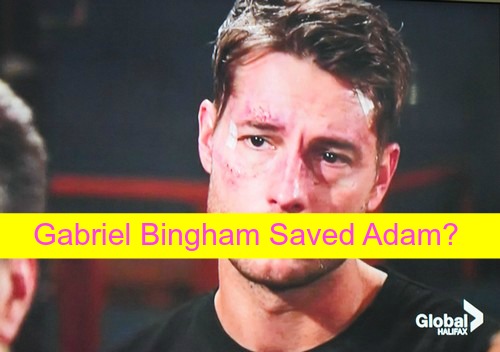 “The Young and the Restless” (Y&R) spoilers tease that fans are in for one heck of a surprise soon. Gabriel Bingham [Justin Hartley] is alive and will be telling his story to the reporter, Leanna Love in the coming weeks. The big question mark is, how will Ms. Love react knowing that this story COULD save one of the Newman boys – a family she has despised for YEARS?

As Sage [Kelly Sullivan] has explained repeatedly, Gabe was a kind, a compassionate beautiful person. Until recently, she believed that Adam [Justin Hartley] was much different. She thought that if she arranged for Adam to take Gabriel’s face, she could talk him into something she never could with Gabe- a commitment. She didn’t factor in that Adam loved his family more than anything.

Gabriel tells Leanna that Sage was the one that helped make the swap possible. He explained to her that night that Delia was hit, Sage was in the car with him. They got out of the car and saw her laying on the side of the road.

They decided to leave her because he had been drinking and was terrified of going to jail. “I was scared of more than anything disappointing my grandmother Bingham. I would rather die than face her disappointment,” Gabe explained with tears in his eyes.

He recalls asking Sage to go for a drive that night; he wanted to revisit the memorial site. “I watched the girl’s father and Adam Newman fight for what seemed like days. They left for a while but returned,” he tells Leanna. Gabe tells Leanna that they came up with a plan; he would run and save his grandma from the embarrassment of learning that he was a monster.

It seemed like out of nowhere; the car went off the road in a tragic accident. Without thinking, he went to save Adam. Gabe knew that he had to save his life – even if it killed him.

Adam was badly burned and needed medical attention immediately. They made the decision then to claim that he died in the fire, and Adam would take Gabe’s identity. He tells Leanna, “Sage didn’t want to do it. I forced her to go along with it. We never thought that anyone would find out.”

Gabe just wanted the story to free him from the guilt of that tragic night. He wants the world to know that Adam never hit Delia. He wanted the Newman’s to know that Sage didn’t just find out that Adam was alive by chance; she orchestrated his resurrection even before Adam knew she changed his identity.

Leanna becomes confused on how to air the story or even if she will reveal it. How can Leanna let people know this HUGE story without the Newman’s knowing it was SHE that broke the story? They would do everything they could to discredit her. Will Leanna go to the police with the story or print it in her newspaper – or reveal it anonymously online? Will anyone believe her? Don’t forget to come back later for juicy “The Young and the Restless” spoilers, rumors, and news!