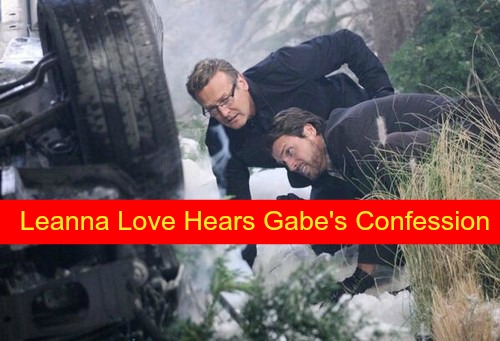 “The Young and the Restless” (Y&R) spoilers tease that Adam Newman [Justin Hartley] will be vindicated from any criminal connection to Delia’s [Sophie Pollono] death in the coming weeks. As CDL posted on Monday, a reporter will arrive in Genoa City to blow the story up revealing that Gabriel Bingham [Justin Hartley] never died saving Adam; instead, he fled the scene of the accident that killed Delia and hoped to turn his back on everyone he knew in Genoa City.

The one thing Gabe didn’t expect was Adam to be tangled up in the mess he created. Gabe will tell the reporter that Adam doesn’t deserve to serve time for Delia’s death because he isn’t responsible for running her over. The one detail Gabriel wasn’t counting on was the reportor COULD have a connection to the Newman’s that provides her a motive to see them suffer.

Gabriel wants his story out and felt terrible for the mess he caused in Adam and Sage’s [Kelly Sullivan] lives. Gabe wanted to escape the Bingham name and desired to anonymously take down Victor Newman for ruining his father and driving him to suicide.

Gabe tells the reporter that he has no quarrel with the Newman boys – Adam and Nick [Joshua Morrow], and he feels terrible they got caught up in the mess.

Gabe explains he has had trouble controlling himself with alcohol, and that is what led to Delia’s death. Gabe never saw her, and after he hit her he felt riddled with guilt. Gabe didn’t know what to do and he found himself going to the memorial site almost daily to find a way to move on from taking her from her parents.

Gabe explains, “That is why I was there when the car went into the water.” Gabe happened to be there with Sage; they acted fast to save Adam from the wrath of the revenge filled father, Billy Abbott [then- Billy Miller].

Gabriel explains that after Adam was injured so intensively, his guilt multiplied. Not only was he responsible for Delia’s death, but he had Adam’s looming demise on his mind. He tried to run; hoping some distance would help ease his mind. It only intensified his feelings.

After Adam was convicted of felony hit and run, he knew he had to come forward. He doesn’t mention how involved Sage is in the scam. It is possible Sage isn’t sure where he is, only knows he escaped on that night that Adam supposedly died.

Sage got Adam plastic surgery to look like Gabe for three reasons: 1) Adam needed plastic surgery after the burns; 2) to protect Adam from Billy’s wrath; 3) so that she could collect the Bingham fortune by marrying ‘Gabe’ after the real Gabriel Bingham fled due to guilt over Delia.

Then, the real shock of the storyline will come to Gabriel. He selected the WRONG reporter to tell his story. According to the rumors, it is looking very likely that Gabe goes to none other than Ms. Leanna Love to blow the story out of the water.

How could he know that Leanna cannot stand the Newman’s? It will be interesting to see if Leanna has moved past her hatred for Victor and the Newman crew to be able to tell Gabriel Bingham’s story in an objective way. Don’t forget to come back later for juicy “The Young and the Restless” spoilers, rumors, and updates!