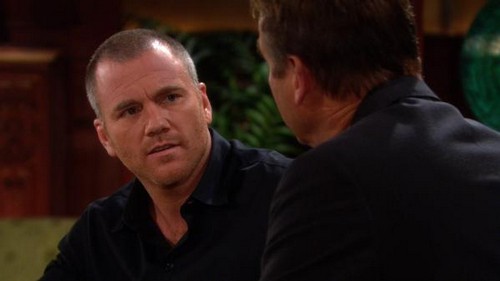 After months of speculation, The Young and the Restless spoilers recently revealed that the results were in on Victoria’s daughter Katie’s DNA test, and Billy Abbott is the father, not Ben “Stitch” Rayburn. Considering the amount of people on the CBS show that were hoping the baby was going to be Stitch’s and not Billy’s – The Young and the Restless fans are shocked there wasn’t a good ole paternity test switcheroo…or was there?

The Newman Family doesn’t exactly have a great track record when it comes to DNA tests – look at how many times Summer’s paternity was questioned. The Young and the Restless spoilers had fans convinced that Victor Newman was going to tamper with the rest results because he had made it pretty clear he did not want Billy Abbott to be the father of his grand-daughter, and a lot of us predicted that Maureen might change the test results so that she could be a grandmother. But, it’s pretty clear that neither of them got their hands on the DNA test – because Stitch is sitting in a bar drowning his sorrows because he is not Katie’s father.

Victoria Newman was pretty wishy-washy about her feelings towards Billy and Stitch, and it seemed like every day new Y&R spoilers were leaked that she wanted one of them to be the father more than the other. However, when the doctor finally delivered the test results, the look on Victoria’s face said it all, and she was clearly happy that Billy was Katie’s dad. So, we can’t hel but wonder if Victoria manipulated the results so she could try to win her ex-hubby back from Chelsea Newman. Another popular rumor floating around the internet is that Abby Newman may have switched the test results, she has been on Team Billy since day one and made it very clear she didn’t want Stitch to be the father of her sister’s baby.

So Y&R fans, what do you think about baby Katie’s DNA test results? Are you shocked Victor or Maureen didn’t change them to make Stitch the father? Do you think Stitch may really be the father and Abby or Victoria tampered with them? Are you having a tough a time as we are believing that a baby was born in to the Newman Family and no one messed with her paternity test? Let us know what you think in the comments below and don’t forget to check CDL tomorrow for more The Young and the Restless spoilers and news.