The Young and the Restless Spoilers: Who’s The Daddy – Victoria Rejects Billy and Rats Out Stitch – Cancels Paternity Test 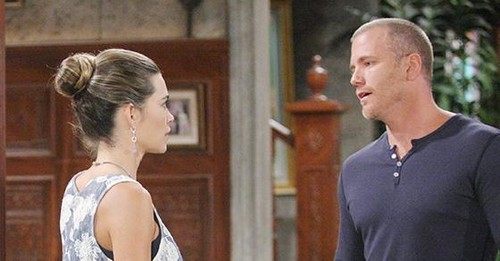 Well, it looks like the Y&R writers have duped fans again. The Young and the restless spoilers teased that Victoria Newman was headed to the doctor to learn the paternity of her baby, and fans were dying to know whether Bill Abbott or Stitch Rayburn would be Victoria’s baby-daddy. However, according to our exclusive Y&R spoiler source, Victoria refuses to have the paternity test done!

Recently on The Young and the Restless Victoria learned that Stitch had a dark secret, was hiding behind a fake name, and had done time in jail for murdering his own father. Stitch argued that his father was abusive, and he didn’t actually murder him, he just plead guilty because he didn’t want the stress of a murder trial to destroy his family. Victoria didn’t want to hear it though, she announced that she and Stitch were over, regardless of the circumstances.

Unfortunately, Victoria learned the news about Stitch right before she headed to her paternity test. According to our CDL exclusive The Young and the Restless spoiler source, on Monday July 28th Victoria goes to her appointment. She informs her doctor that she is concerned about confidentiality, and reveals that Stitch abused his privileges at the hospital and snuck a peak at her medical records and learned she was pregnant. Victoria tells her doctor that she won’t be taking the paternity test and she doesn’t want to know who the father of her unborn baby is, because she has no intention of raising a child with Billy or Stitch.

So, it looks like we won’t be finding out anytime soon who the father of Victoria Newman’s baby is. She plans to never find out and claims she doesn’t care, but it’s a soap opera, so we all know the truth will come out sooner or later (we’re hoping sooner). Are you as frustrated as we are that we won’t be learning who Victoria’s baby-daddy? Who do you think will wind up being the father when the truth does come out? Let us know what you think in the comments below and don’t forget to check CDL tomorrow for more The Young and the Restless spoilers.

Soap Opera Spy Facebook fans are none too thrilled with this stalling tactic of Victoria’s in determining her babby daddy:

Knew it wouldn’t be that easy, and will drag on for effing ever just like all the rest of the stories to the point of who gives a crap!

Ooooh yeaaaaahh maybe this storyline can drag on longer than “who’s summers baby daddy” DOES ANYONE EVEN CARE ANYMORE!!!!! Sheesh!!

Oh the kid will be sick with something so they will have to find out who the father is.

I give up. I think the women on this show are stupid! Not the real life actresses. The writers? Smh.

This whole WTD is about Stretch not about anything else. Wonder how long they are planning on keeping JFP? Otherwise the same old garbage day in and day out.

You do know that it won’t be the REAL Phyllis (Michelle Stafford).Y&R (Jill Pharren Phelps) has screwed up Y&R. The only way I know whats going on anymore is if something pops up on my computer .It doesn’t look anything like MY Y&R.so I don’t watch it anymore.It has lost ALL it’s CLASS!!

The thing is I just chose random comments but these are representative – someone needs to wake up at Y&R and pay more attention to the soap fans.