The Young and the Restless Spoilers: Stitch Did Prison Time For Murdering His Father – Victoria ‘Controls’ Paternity Test Results 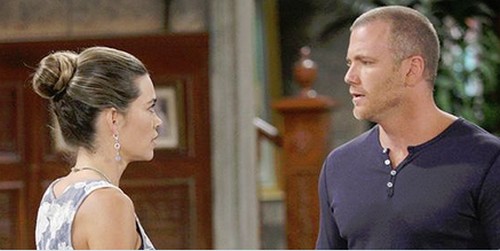 The Young and the Restless fans have been waiting months to find out Stitch’s dark secret, and spoilers teased that during the week of July 21st it would finally be revealed. Fans have speculated that he may have killed Kelly’s son or even the childhood friend whose identity he stole. No one predicted how twisted his secret would actually be.

According to our exclusive CDL The Young and the Restless spoiler source, Stitch’s secret will finally come out on Friday July 25th. With Billy pressuring him, Stitch has no choice but to confess to Victoria that he is indeed a murderer, and he killed his own father! According to Stitch he is innocent though, in his version of the story he claims that his father was an abusive drunk, and after he attacked Stitch one night in the garage he passed out. The garage caught on fire, and Stitch barely made it out alive, he couldn’t save his passed out father. Stitch admits to Victoria that he plead guilty because he didn’t want his family to have to go through the stress of a long and gruesome court case, and he served his time in prison.

Victoria obviously didn’t take the news well, and the last thing she wants is to have a baby a man twisted enough to murder his own father, regardless of how dysfunctional their family was. On the July 25th episode of The Young and the Restless, Stitch heads over to Victoria’s house and begs her to let him in, but she doesn’t fall for it. CDL’s exclusive Y&R spoiler source teases that when Victoria heads to her paternity test, she informs the doctor that she wants to “control the outcome.” It looks like Victoria is having Billy’s baby, regardless of what the DNA says.

So Y&R fans, are you as shocked as we were that Stitch killed his own father? Or, did you see that twist coming? What do you think about Victoria tampering with her own paternity test results? Share your thoughts and theories in the comment section below and don’t forget to check CDL tomorrow for more The Young and the Restless spoilers.