The Young and the Restless Spoilers: Chelsea Tells Billy The Truth About Murderer Stitch – Phyllis Wakes Up From Coma 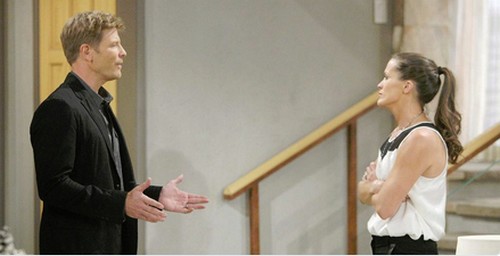 Over the course of the last few months, we have learned bits and pieces about Stitch’s past, as his relationship with Victoria Newman grew more and more serious. It was revealed that Stitch is actually Kelly’s brother, he is hiding behind the name of a childhood friend who passed away years ago, and he murdered a man. The Young and the Restless spoilers for the July 24th episode tease that Billy finds Stitch’s old yearbook at Chelsea’s house, and Chelsea comes clean and confesses to Billy that she recently learned Stitch is a murderer. Naturally, Billy freaks out, and makes a bee-line for Stitch and Victoria. Billy demands Stitch tell Victoria the truth on the spot, and it looks like Stitch has no other option but to come clean about his past.

The Young and the Restless spoilers for July 24th also tease that Phyllis Newman begins waking up from her coma. Victor recently sent a come specialist to Georgia to try and revive Phyllis, because he wants her to tell him what Sharon’s secret is. Apparently Dr. Hans Cutler already worked his magic, because when Summer is visiting her comatose mother, Phyllis’s hands start moving!