The Young and the Restless Spoilers: Phyllis Fires Sharon – Kevin’s Surprise For Mariah – Nick Obsessed With Sage, Tracks Her Down 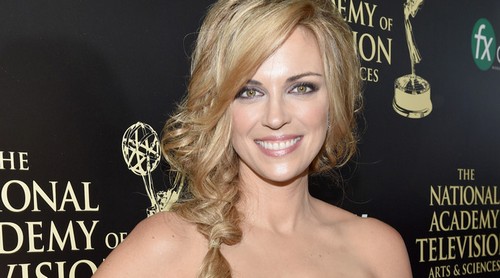 The Young and the Restless spoilers tease that the Christmas Spirit will hit the residents of Genoa City during the Thursday December 4 episode of the CBS soap. The holidays are right around the corner, so naturally some of our favorite Y&R characters need to start putting up their Christmas trees. According to the Y&R spoilers for tomorrow’s episode, Kevin and Chelsea run in to each other at the Christmas tree lot and Chelsea fills Kevin in on the DNA test results and Billy’s new daughter. It’s pretty clear that Kevin doubts Billy and Chelsea’s relationship is going to survive this.

The Young and the Restless fans have been rooting for a love story between Kevin and Mariah for quite some time, and it looks like the sparks are really starting to fly between the two close friends. On the December 4 episode of The Young and the Restless, Mariah and Kevin bond over their mutual lack of Christmas spirit and reflect on their previous holidays with Ian Ward and Delia. Y&R spoilers tease that Kevin decides to make a grand gesture – and surprises Mariah with her own Christmas tree.

In other The Young and the Restless news, Y&R spoilers tease that Phyllis forces Jack to give her back her job at Jabot – and naturally her first order of business is to promptly fire Sharon. Rumors have been flying around the internet about a possible love connection between Sage and Nick Newman, and it looks like the writers really might be going there. After Nick leaves the hospital he makes a bee-line to the cabin in the woods where Sage and Adam Newman are staying because he can’t get the woman that saved him out of his head.

So Y&R fans, do you think that this is the end of Chelsea and Billy? Is he going to end up back with Victoria and his baby? How do you feel about the sparks flying between Kevin and Mariah? Will Nick Newman wind up with newbie Sage? Or do you think he belongs back with Sharon? Let us know what you think in the comments below and don’t forget to check CDL tomorrow for more The Young and the Restless spoilers and news.