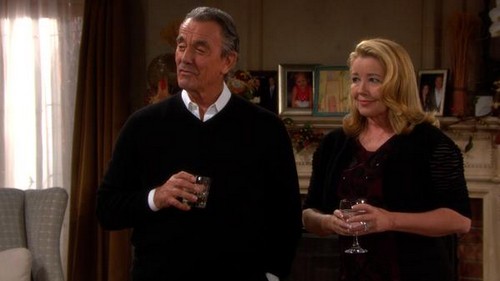 The Young and the Restless spoilers for the Monday December 1 episode reveal that Y&R fans will not want to miss a single second of the CBS soap. It looks like Sharon and Summer (Hunter King) finally realize that Nick Newman is MIA, while Summer accuses Sharon of trying to manipulate her father – Sharon’s lawyer David Sherman pressures her into using the fact that Nick ran away as an argument in Faith’s custody hearing.

The Young and the Restless spoilers from CDL’s exclusive spoiler source tease that the person who actually finds Nick (Josh Morrow) lying in the woods, trapped in the bear trap, is Sage – Adam Newman’s new partner in crime. Sage runs back to the cabin and tells Adam (Justin Hartley) she needs his help rescuing a wounded stranger she found in the woods. But, when they arrive back at the bear trap Adam is obviously shaken when he realizes the stranger he is supposed to be rescuing is actually his brother Nick Newman.

In other The Young and the Restless news, the highly anticipated DNA test results are in, and Billy Abbott is the father of Victoria Newman’s daughter Katherine. Although Billy promised Chelsea (Melissa Claire Egan) that the DNA test results weren’t going to change a thing between them, it already seems to be doing just that – and Billy (Burgess Jenkins) decides to go home with Victoria and the baby, instead of home to Chelsea. Meanwhile, Stitch hits up the nearest bar and begins drinking his sorrows away.

The Young and the Restless spoilers for Monday December 1st also tease that Y&R fans can expect to see Lauren and Jill discussing Joe’s business proposal – and Lauren is furious when she learns that Michael is representing Joe Clark (Scott Elrod) and helping him take Dylan’s (Steve Burton) business and never even told her about it. Michael Baldwin (Christian leBlanc) is a little preoccupied though, he receives a phone call from his doctor to discuss treatment options for his cancer.

So Y&R fans, are you happy Billy is the father of Katie, or were you hoping that it was Stitch? Is this the beginning of the end of Chelsea and Billy? Will Adam Newman AKA Gabriel help his brother Nick? Does Sharon stand a chance of actually getting custody of Faith? Let us know what you think in the comments below and don’t forget to check CDL tomorrow for more The Young and the Restless spoilers and news.