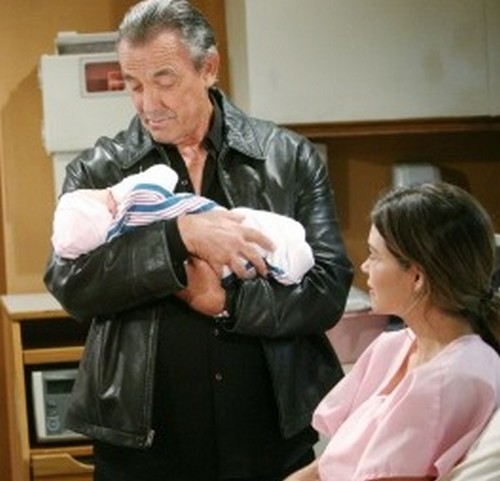 The Young and the Restless spoilers tease that on Wednesday’s November 26 episode of the CBS soap, our favorite Y&R characters will be celebrating Thanksgiving in Genoa City. Victor and Nikki Newman prepare an elaborate Thanksgiving feast for their family, and Sharon even drops Faith off to spend the holiday with her grandparents. Sharon has the door promptly slammed in her face, so she heads off to have dinner with Mariah and Noah. Christine, Paul, and Dylan attend the soiree at the Newman’s and toast to Dylan being reunited with his father (of course Christine skips the booze because she is desperately trying to get pregnant).

The Young and the Restless spoilers tease that Victoria arrives at the Newman ranch with her daughter for Thanksgiving, and finally reveals the infant’s name – which is Katherine, after the Genoa City matriarch. Y&R spoilers tease that Stitch will spend Thanksgiving at the lab bonding with Ashley and filling her in on his innocence. However, he receives a phone call from the doctor at the hospital calling him in to reveal the baby’s DNA test results. In other The Young and the Restless news, Jack and Phyllis also spend the holiday together, reminiscing about their previous Thanksgivings.

According to The Young and the Restless spoilers, Nick Newman will not be having any turkey this year – because he is still lying in the woods caught in an animal trap and writhing in pain. Apparently, the booze he found from the 80s is starting to wear off, and the pain is becoming unbearable. Y&R spoilers tease that Summer will finally find him and rescue him, but it is unclear how she finds him.

So Y&R fans, are you excited for the Genoa City Thanksgiving festivities. It looks like it is almost time for the moment of truth — do you want Stitch to be Katherine’s father or Billy? How do you think Summer finds Nick? Could it just be a dream?Did you notice any sparks flying between Stitch and Ashley Abbott? Let us know what you think in the comments below and don’t forget to check CDL tomorrow for more The Young and the Restless spoilers and news.