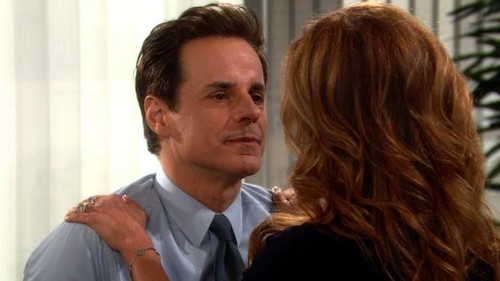 The Young and the Restless spoilers tease lots of exciting storylines coming up in the near future, and some of the rumors floating around the internet right now about the CBS soap are nuts! If half of these rumors turn out to be real spoilers – then Y&R fans better buckle up for an insane winter on the daytime drama. Here are a few of our favorite The Young and the Restless rumors that are currently floating around. Please keep in mind that as of right now these are just rumors, and may or may not come to fruition.

Michael Baldwin Leaving Show: Long before Michael got that fateful call from his doctor and learned he had cancer, CDL revealed that Jill Farren Phelps was killing off another veteran with cancer. Now, as much as we hate to say this – it’s not looking good for Christian LeBlanc’s character. Rumor has it that LeBlanc actually told Jill Farren Phelps and TPTB that he was quitting the show and they worked out his exit and the character’s death together. But then again, JFP’s trolls may have just started that rumor to make her appear as less of the villain than some  think her to be.

Adam Newman’s Return To Genoa City: The Young and the Restless spoilers have been teasing Adam Newman’s return to Genoa City for weeks and weeks… and weeks. IF you have been waiting for Adam to make his big return and swoop in and steal his wife and son back from Billy Abbott, then don’t hold your breath. Rumor has it that TPTB plan to drag this storyline out for months. And, we’re hearing through the grapevine that no one will know that Adam Newman is alive until next Spring. Get used to Gabriel.

Shadam Back On: Adam Newman and Sharon Newman’s relationship, affectionately dubbed “Shadam,” has a huge following on the internet and rumor has it that the Y&R writers are going to try and cash in on that and reunite the two characters. Newly single Sharon might hook up with “Gabriel” when he arrives in Genoa City, and after a hot and steamy affair realize that there is something familiar about the newcomer.

Mariah and Kevin A Couple: Since Mariah arrived in Genoa City her love life has been pretty uneventful, except for her uber creepy crush on Nick Newman. Everyone has noticed the chemistry that Mariah shares with her friend and confidante Kevin though, and rumor has it that the writers are planning on going there and plan to slowly develop a romantic connection between the two characters.

A New Love For Lauren Fenmore: What is a girl to do when her husband is having trouble “performing” in the bedroom and obviously keeping a horrible secret from you? Well, if you are Lauren Fenmore then you might get caught up in a hot affair. Rumor has it that Lauren and newcomer Joe Clark’s business relationship could quickly transform into a romantic one. Let’s face it, with Christian LeBlanc possibly on his way out – Lauren will be a widow and need a new man in her life.

So Y&R fans, keeping in mind that those are just rumors, what do you think about Michael’s cancer storyline? Is Christian LeBlanc leaving the show? If he does go, do you think that Lauren and Joe would make a good couple? What about Sharon and Adam, do you think there will be any chemistry between them now that Hartley is taking on the role? Let us know what you think in the comments below and don’t forget to check CDL tomorrow for more The young and the Restless spoilers.