The Young and the Restless Spoilers: Victoria’s Emergency Baby Delivery by Stitch and Billy – Sharon Attacked by Avery 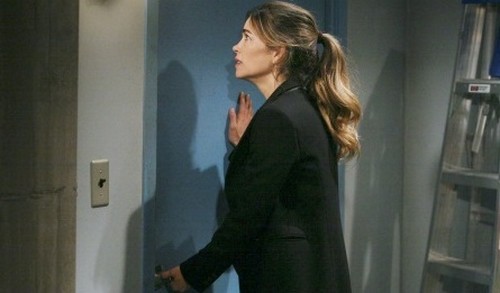 The Young and the Restless spoilers and news for the week of November 17 – 21 tease some exciting drama for Y&R fans, and rumor has it you won’t want to miss a single episode of the CBS soap. The Young and the Restless spoilers have been teasing the birth of Victoria Newman’s baby for quite a while now, and the highly anticipated birth will go down in a parking ramp during the week of November 17. Stitch and Billy set their differences aside and search for their missing maybe-baby-mama, only by the time they find her in the janitor’s closet it is too late, and Stitch has no choice but to help her deliver the baby right then and there.

With all of the drama in Genoa City, sometimes we forget that poor Neil Winters is now blind. According to The Young and the Restless spoilers for the week of November 17, Neil shares a heartfelt conversation about his blindness with his friend Jack Abbott. Y&R spoilers tease that Neil reveals to Jack he is still struggling with losing his sight and trying to learn Braille – and he admits that he has been craving hitting the bottle again something fierce lately!

In other The Young and the Restless news, Adam Newman AKA Gabriel, starts planning his big return to Genoa City, he is ready to see Chelsea and his son Connor. The Young and the Restless spoilers also tease that the week of November 17 will be filled with confrontation, Avery has some choice words for Sharon about the DNA test debacle, and Dylan pays Joe a visit and threatens him.

So Y&R fans, what did you think of Victoria’s dramatic birth? Now that both Billy and Stitch were there, they both have a connection to Victoria’s child, who do you think is actually the father though? Is Neil’s blindness going to cause him to fall of the wagon? If his blindness doesn’t, will he turn to the bottle when he learns about Hilary and Devon’s affair? Do you think it’s right for Avery to get involved in Nick and Sharon’s drama and curse Sharon out, hasn’t she paid enough for what she did? Let us know what you think in the comments below and don’t forget to check CDL tomorrow for more The Young and the Restless spoilers and news.

Hope it is Billy’s baby also!

I hope the baby is Billy’s

As per usual… it’s taking forever to get her out ! Stupid !Agree about the hospital but Victoria’s hair looks Gorgeous. So does Chelsea. Must be new hair dressers.

No one on this show has had a health baby in a hospital . Always so dumb .

The whole show Friday was stupid, I agree!

You know the complications regarding Victoria’s baby are only beginning….