The Young and the Restless Spoilers: Victoria Goes Into Labor – Maureen Locks Her in a Closet Then Has a Heart Attack! 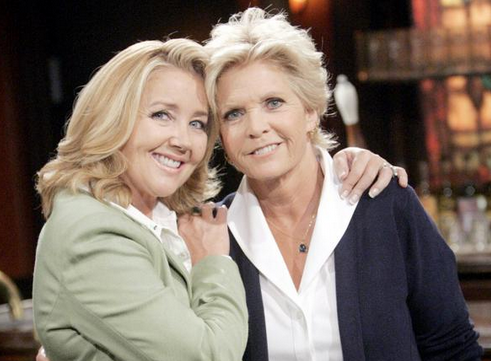 The Young and the Restless spoilers tease that the week of November 10 will be full of action-packed episodes of the CBS soap, and Y&R fans will not want to miss a minute! Victoria Newman’s pregnancy has been a major storyline on The Young and the Restless for months, and rumor has it – it’s finally time for her to give birth to the maybe-Stitch, maybe-Billy baby. Of course, the birth of a baby on a soap opera can’t occur without a few dramatic hiccups.

According to The young and the Restless spoilers in the November 17 edition of Soap Opera Digest, all hell breaks loose when Victoria puts two and two together and realizes that Maureen killed Stitch’s father and he took the blame for it. Being the amazing citizen that she is – Victoria attempts to call the police and tell them the truth, but Maureen locks her in a supply closet before she can do so.

Y&R spoilers tease that Stitch goes looking for Victoria when she doesn’t show up to their dinner date, however he doesn’t find her. He does however find his mother unconscious because she apparently had a heart attack after locking up Victoria, and he rushes to the hospital with murderer Maureen. Of course – the stress of being locked in a closet takes a toll on Victoria and she goes in to labor, but no one knows where she is. And, the one person who does know where she is – is unconscious. It’s a race against the clock – and Billy and Stitch begin frantically searching Genoa City for their baby-mama.

So Y&R fans, do you think that Maureen will die and this is how Meredith Baxter will exit the soap? What about Victoria, will someone find her before she gives birth? Could she lose the baby? Who would you like to see the father be, Stitch or Billy? Let us know what you think in the comments below and don’t forget to check CDL tomorrow for more The Young and the Restless spoilers and news.