The Young and the Restless Spoilers: Maureen Locks Victoria in a Closet After Murder Confession – Joe Clark Kisses Avery 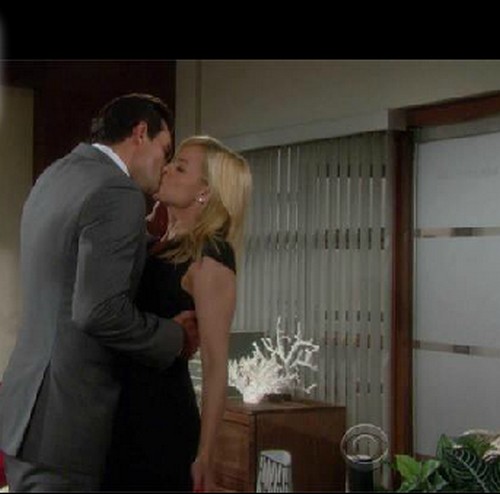 The Young and the Restless spoilers and news for Tuesday November 11 tease an action-packed day on the CBS soap. Y&R spoilers have been hinting at a possible love triangle between Avery and Dylan and her ex Joe Clark (Scott Elrod) ever since he arrived in Genoa City. Joe has made it pretty clear that he isn’t over his and Avery’s break-up by trying to sabotage Dylan’s business and buying up the building that he leases. According to Tuesday’s spoilers, after a heated argument Joe makes him move and kisses Avery (Jessica Collins)!

Victoria’s pregnancy has been a prominent storyline on the CBS soap for months now, and according to The Young and the Restless spoilers from CDL’s exclusive source tell us that on November 11 her unborn baby will be in serious danger when Maureen locks her in a janitor’s closet. En route to dinner with Stitch (Sean Carrigan), Victoria runs in to Maureen and she winds up confessing to killing Stitch’s dad and explains that she let her own son go to prison for her crime. When Victoria attempts to call the police and tell them the truth and clear Stitch’s name, a desperate Maureen (Meredith Baxter) shoves her in to a nearby closet and locks the door, then tosses her phone in a trash can.

In other The Young and the Restless news, on November 11 fans can expect to see Paul and Christine getting close again and discussing having a baby. Meanwhile, Neil pressures Devon about who the mystery woman is in his life, and Colin pays Hilary a visit ad teases that he knows about her sordid affair. Y&R spoilers also tease that on Tuesday’s episode Abby shares an awkward moment with Det. Harding.

So Y&R fans, are you shocked that Maureen let Stitch take the fall for her crime, or had you already figured out she was his father’s killer? Who do you think will rescue Victoria? What do you think of Avery and Joe, is there any chemistry or does she belong with Dylan (Steve Burton)? Let us know what you think in the comments below and don’t forget to check CDL tomorrow for more The Young and the Restless spoilers and news.