The Young and the Restless Spoilers: Michael Hides Cancer From Lauren, Stitch and Maureen’s Secret, Kelly Sulivan Debuts as Sage 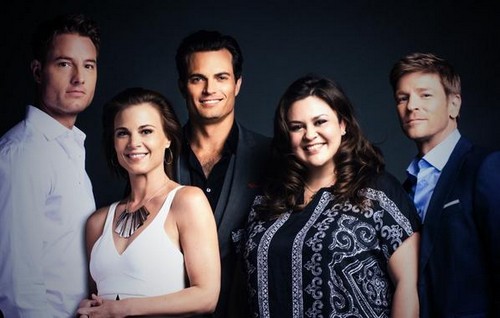 The Young and the Restless comings and goings also reveal that on Tuesday October 28 General Hospital alum Kelly Sullivan will make her Genoa City debut. Although spoilers are few and far between regarding Sullivan’s new character, we do know that her name is Sage, and rumor has it she is somehow linked to someone who already resides in Genoa City.

CDL revealed months ago that Jill Farren Phelps was planning on killing off the character Michael Baldwin with cancer, and it looks like that rumor is coming to fruition. Michael recently learned from his doctor that his test results confirmed he had cancer, however he hasn’t shared the news with his friends or family yet. The Young and the Restless spoilers for the week of October 28 reveal that Baldwin will attempt to keep his dark secret, but Jill and Lauren are suspicious. And, Kevin overhears Michael on a cryptic phone call informing his doctor that he hasn’t told his wife the news yet.

The Young and the Restless spoilers for the week of October 28 also reveal that Phyllis and Sharon will compare notes and try to put their fragmented memories together to determine the events leading up to Phyllis’s coma. And, the resident psychic Madame Isadora continues to get under some of the character’s skin.

So Y&R fans, what do you think really happened to Stitch’s dad? Did he cover for his mom Maureen? Do you think that JFP will really kill off Michael Baldwin, or will the character recover from the cancer? Who do you think will remember that Summer’s paternity test results were switched first, Sharon or Phyllis? Let us know what you think in the comment section below and don’t forget to check CDL tomorrow for more The Young and the Restless spoilers and news.