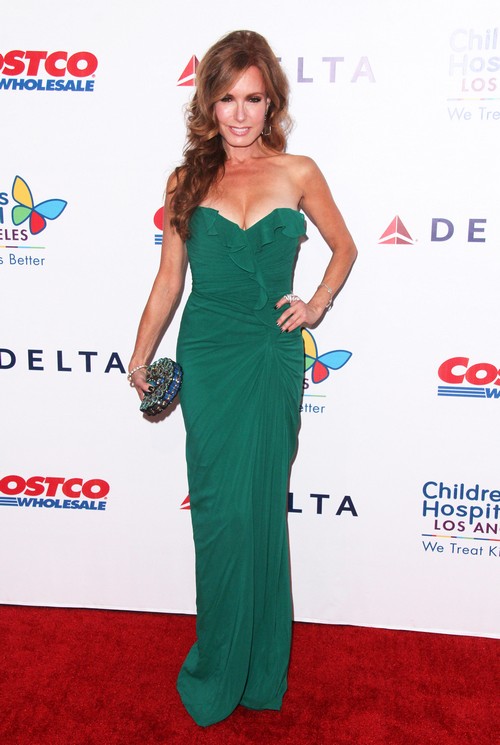 The Young and the Restless Spoilers indicate that the news that Michael Baldwin has cancer is making everyone extremely upset, fans of Y&R are sad as will his wife Lauren be when she finds out. Certainly there has been speculation here on CDL that Jill Farren Phelps might kill off Michael Baldwin and get rid of Christian LeBlanc. We hope this isn’t true. Here we present a detailed his of Lauren Baldwin in the hope that you will appreciate what the poor woman will go through when she gets the news of her husband’s illness.

Tracy E. Bregman has portrayed the role of Lauren Fenmore Baldwin since 1983. Lauren grew up in Genoa City with her father, Neil Fenmore, who owned Fenmore Department stores. Joanna Fenmore, Lauren’s estranged mother, was not around much while Lauren was growing up. Lauren remained in a very close loving relationship with her father until his passing.

As a teenager, Lauren sang in Danny Romalotti’s band. Traci Abbott, another teen but rival of Lauren, also sang in the band. Lauren and Traci were very different. Traci was in love with Danny. This made Lauren very uncomfortable. Lauren was the pretty petite one that got everything she wanted. Lauren bullied Traci and made her feel bad about herself. Over the years, Lauren has regretted those decisions she made as young woman. She has since apologized to Traci for all the hurt she caused her all those years ago.

A short time later, Lauren met and fell in love with Paul Williams. The couple was very happy in their marriage until a stalker named Sean entered their lives. Sean tried to lure Lauren away from Paul by having Paul believe he and Lauren were having an affair. Unfortunately, Paul believed the rumors and divorced Lauren. Sean continued to stalk Lauren and eventually kidnapped her. He tried to bury her alive, but Paul was able to discover the truth and saved Lauren from a horrible death. The two never remarried, but remain best of friends to this day.

Lauren’s dad Neil passed away. Lauren was left to the Fenmore fortunate along with running the Fenmore Department stores.

Lauren later met and married Dr. Scott Grainger. A crazed jealous Sheila Carter hated Lauren and wanted to have Scott’s child. Sheila drugged Scott and they slept together. Shelia soon found out she was pregnant with Scott’s child. Scott wanted to do the right thing. He divorced Lauren and married Sheila. Shortly after, Lauren discovered she was also pregnant with Scott’s child. Sheila ended up having a miscarriage but did not reveal that information to anyone. She pretended she was still pregnant and bought a baby on the black market. After Lauren’s baby Scotty was born, Sheila switched the babies. Soon after, baby Dillion died of meningitis. Lauren was over come with grief thinking her child died. All along, Sheila was really raising him.

Finally, the truth came out about Sheila switching the babies. Lauren and Scott were finally reunited with their son Scotty. Sheila hated Lauren and wanted her dead. In a turn of events, it was Sheila who was presumed dead after a fire broke out. Lauren was so happy thinking her rival was dead but remained overly cautious especially where Scotty was concerned. She even sent Scotty to boarding school as to be out of the spot light and out of any connection with Sheila.

A few years later, Lauren went to her good friend Eric Forrester’s wedding in LA. Lauren was more than shocked when she saw Eric’s bride was Sheila Carter. Alive and getting married to her friend. Lauren was still with Scott who became mysteriously ill and ended up passing away. Lauren left Genoa City and moved to LA to start her clothing line with Spectra Fashions.

While in LA, Lauren started an affair with Dr. James Warrick a psychiatrist. Eric finally realized his wife was a wack job and, with Dr. Warrick’s help, they had Sheila committed to a mental hospital. Eric was also able to divorce Sheila. Lauren and Eric became more than friends and had a brief affair. It soon ended after they were both in a plane crashed coming home from Venice.

In 2001, Lauren found herself back in GC. She teamed up with Jabot and open her first boutique Glow by Jabot. At this point, Lauren had to deal with an another person who was obsessed with her, Kevin Fisher. This led her to meet Kevin’s brother Michael Baldwin. The two fell in love and, with Kevin’s blessing, they got married.

Before the couple actually said “I do,” Scotty returned to Genoa City to help his mother plan her wedding. Unfortunately, Sheila Carter also showed up, too, but in disguise. This time she was posing as a student that Scotty tutored. This gave her direct access to Lauren. Sheila managed to poison Lauren. She recovered and married her love Michael. The couple left for their honeymoon, but trouble soon followed.

Sheila had help this time from Tom Fisher, aka Terrible Tom. They kidnapped Lauren while on a yacht as Lauren and Michael were on their honeymoon. They set the yacht to explode. Everyone including Michael, feared for the worse, that Lauren had died in the fire. Lauren was being held in a farmhouse by Terrible Tom, who also took Sheila as captive. Paul Williams was able to track Lauren down and rescued her. However, Sheila was able to get away.

Lauren and Michael were eventually reunited. They wanted to start planning a family. When the couple realized they were expecting their first child, Lauren was afraid that Sheila Carter would come back and try to take this child away. After Lauren gave birth to a son they named Fenmore, Lauren experience panic attacks. She was so scared, she would not leave her apartment.

Finally, Lauren felt some ease as she started to venture out. Unknowing, Michael and Paul were holding Sheila in a warehouse near by. Sheila had plastic surgery to look exactly like Lauren’s best friend, Phyllis, who herself just gave birth to a baby girl Summer. It didn’t take long for Sheila to escape. With a new face, she was able to easily kidnap Fenmore, Phyllis and Summer.

Lauren and Michael were agonized that the evil Sheila Carter took their son. Michael, along with Nick Newman, Phyllis’s husband at the time, was able to rescue the trio and Sheila was killed. Lauren was filled with joy that her baby was back with her and most importantly that Sheila was dead.

Life was good for the Baldwins. Enjoying their time together and watching Fenmore grow. But the good times don’t last very long. Sara, Sheila sister, came to Genoa City. She was looking for revenge for her sister’s death. Shelia also had two long lost children that also showed up in town, Daisy and Ryder Fisher. Their father was Terrible Tom, which meant they shared the same father as Kevin Fisher. Sara even had plastic surgery to look just like Lauren. Sara was able to kidnap Lauren along with Kevin’s wife Jana and held them in a cage. Sara was able to double in Lauren’s life. Michael soon found out his look-a-like wife was actually Sara. Michael and Kevin found and rescued Lauren and Jana. Sara was killed. Lauren began to suffer emotional distress from her time in captivity.

Before long, Lauren was back to herself. This time, Lauren received some good news, she had a half sister, Jill Foster Abbott! It took a little while and some coaxing by Michael, but Lauren was finally able to accept Jill into her life and family. Since they shared the same father, Lauren gave half of the Fenmore empire to Jill.

Once Fenmore was in high school, issues started to arise for the boy. Fen bullied a boy Jamie so badly, he almost took his own life. Michael was DA at the time and did not want to show his son any leniency. He had Fen arrested. Fenmore then began using drugs as a way to cope with his dismal situation. Lauren was extremely distraught about the arrest. She left Michael and started an affair with Carmine Batisco, a local bartender.

Michael tried everything to win Lauren’s heart back. It took a lot of time and energy, but she was finally able to forgive Michael. After the two reconciled, Carmine was found dead, with Lauren standing above him. Michael saved Lauren from being arrested, by pleading guilty of Carmine’s murder. Eventually, Carmine was found in the witness protection plan and Michael was cleared of all murder charges.

Again, the Baldwins are ready to live a normal life. Fenmore went to rehab and then moved to Arizona to attend college. Lauren and Michael find themselves as empty nesters. They want to concentrate on each other and make the most of their time together.

Everything is falling into place, except when the two want to be intimate. Michael is having issues pleasing his wife. Michael is thinking stress and work are causing his issues. Lauren knows better; she fears that there is something wrong with Michael physically. She finally persuades Michael to see a doctor for physical and medical tests.

Thinking Michael had a clean bill of health from his doctor, they all celebrate, including Fen, who came in to visit his parents. In the mean time, Michael’s doctor is worried about some high PSA levels of his recent test. What will this mean for Lauren and Michael? Is Michael sick with cancer, if so, is it terminal? Can this be the beginning of the end for the Baldwins? Stay tuned to Y&R spoilers on this page for breaking news!