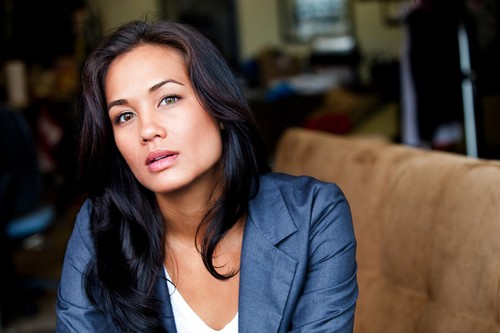 The Young and the Restless spoilers reveal that actress Nadine Nicole, who has previously appeared on Bold and the Beautiful, will make her debut as Gwen – an employee at Jabot this week on the CBS soap. Y&R comings and goings news confirm that Nadine will make her first appearance on Wednesday, December 3. When spoilers were first leaked regarding the new character, it was teased that she was a “conservative accountant who became a different person after hours.” Rumor has it that Nadine Nicole will spice up Devon and Hilary’s affair and cause a rift between the two lovers.

Devon and Hilary have been trying desperately to keep their scandalous affair a secret, and even paid Colin millions of dollars to keep quiet. The Young and the Restless spoilers tease that during the week of December 1st Lily will insist on meeting Devon’s new girlfriend, which is quite a predicament. Hilary and Devon decide it is only fair that she choose a fake girlfriend for him to parade around his family so that no one figures out that he is sleeping with his step-mother.

According to The Young and the Restless spoilers, Hilary decides to recruit the mousy accountant at Jabot to play the part of Devon’s fake girlfriend. However, Hilary’s plan backfires when she learns that Nadine Nicole’s character Gwen isn’t so mousy after she leaves the office. And, to add insult to injury, there is some obvious chemistry between Devon and Gwen and Devon is enjoying his fake girlfriend a little more than he should be.

So, Y&R fans, what do you think of Gwen’s new role in Hilary and Devon’s messy affair? How funny is it that Devon’s fake girlfriend wants to be his real girlfriend? Does Hilary have any right to get upset, after all she is married to Devon’s father? Do you think Devon and Gwen make a cute couple, or would you rather see him with his step-mother Hilary? Let us know what you think in the comments below and don’t forget to check CDL tomorrow for more the Young and the Restless spoilers and news.