The Young and the Restless (Y&R) Spoilers: A Miscarriage, Sharon Off Her Meds and A Stolen Baby 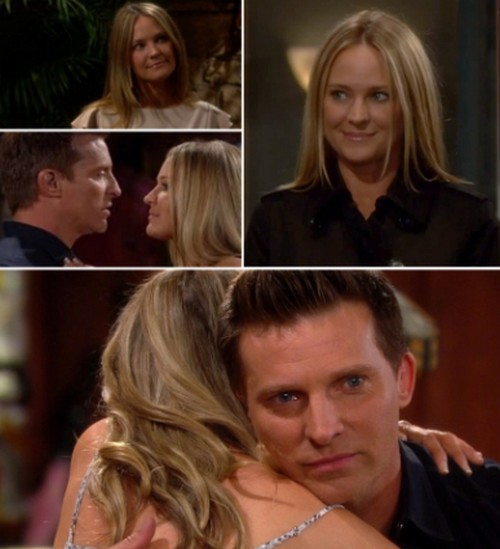 The Young and the Restless spoilers explore the romance between Dylan and Sharon and what an expected miscarriage and baby theft will do to the Sage, Nick, Dylan and Sharon relationship. From the time Y&R fans knew Steve Burton would be the new character Dylan McAvoy fans speculated that he would be Sharon’s (Sharon Case) new love interest. Dylan McAvoy and Sharon Newman seemed to have been destined to be the new super couple of GC almost from the moment he arrived in town in Jan 2013. It does seem that was the route the Young and the Restless writers were taking them then a shift came upon them and Shylan was no more.

Dylan came to GC searching for lost love Avery Baily Clark (Jessica Collins) [who was unfortunately dismissed from Y&R in typical Chuck Pratt Jr. woman-goes-nuts style] and when he found her she was hooked up with Nick Newman (Joshua Morrow). Dylan and Avery felt it was best if he went back home to Chicago. On his way back Dylan got in an accident Sharon Newman – Nick’s (Joshua Morrow) ex-wife accidentally slammed into him, running him off the road and into a tree. Sharon called 911. Dylan was rushed to the hospital where he was found to have broken ribs and a concussion. Usually when soap characters meet under these circumstances it is inevitable that the characters will hook up.

Dylan was released the next day and of course had to thank Sharon in person. Dylan found Sharon’s place a shambles from the storm damage and she was distraught because she could not get anyone to work on her house – so Dylan being a construction worker by trade, offered his services and the damsel in distress was more than happy to accept – after all she was single again and we all know Sharon cannot stay single for long.

During this “bonding time” Sharon learned about Dylan’s life – how his mother died while he was at war in Afghanistan and how his dad broke his back and Dylan had to run the family construction business. Later Dylan would find out that Nikki Newman (Melody Thomas Scott) was his biological mother and also learn in June 2014 that Paul Williams [Doug Davidson] was dad. So as we watch Sharon and Dylan spend quality time together and the fans thought they were right that these two would be the next hot Y&R couple. Dylan even became close with Faith (Aly Lind) – he found her when she was lost in the woods bringing her home to a worried mother. But alas, TPTB decided it was not time for Shylan and went the Avery route, pairing Sharon back with her long time and first love Nick Newman (Joshua Morrow).

It now looks like 2015 is Shylan’s year… or is it? Sure they have a baby on the way but will Sharon go a full term pregnancy giving Dylan his dream of his own family? Will this couple have to weather many storms including Sharon’s crazy antics while off of her bipolar meds on top of Dylan’s bouts with PTSD? Shylan seem to be a match made in heaven – each crazy balancing the other out. Sharon has been showing signs of instability which are signs of Sharon not taking her meds and we all know what happens when Sharon is off her meds – things burn and DNA tests get changed.

CDL reported earlier that there would be baby drama between pregnant Sage (Kelly Sullivan) and pregnant Sharon one losing their baby and the other stealing the living baby. The question is will Sharon be the victim again – after all Faith was stolen from her as a baby by Adam (Michael Muhney). Will TPTB repeat the same story with the same character being victimized or will they make Sharon the thieving culprit stealing Sage’s baby – victimizing her and forcing fans to have some kind of sympathy for the hated Sage. As CDL said, bad things happen when Sharon is off her meds. Will Sharon be wrongfully accused because of her ugly past or will she be back to crazy town for real?

CDL thinks Dylan and Sharon will get through these tough times until of course Nick Newman decides he wants Sharon back which will happen after all Sage’s lies come to the surface! We did see signs of closeness between Sharon and Nick while they were putting the baby crib together – Sage and Dylan walked in on them hugging. Sage is very jealous and the whole baby stealing episode could very well come to pass. Sage has shown in the past that when she is desperate she will stop at nothing to get her way – so either way a baby will be stolen – the question is which cray cray will be the perpetrator? Will Dylan and Sharon wade through the storms ahead? Dylan and Sharon have been friends since 2013 which is record breaking for Sharon so maybe Dylan is the guy for her after all.

What do yo think CDL’ers do you like Dylan and Sharon as a couple or do you want Nick and Sharon back together? Please leave your thoughts and comments in the CDL comments below.