The Young and the Restless Spoilers: Sharon and Sage Baby Stealing Drama Unfolds After Miscarriage or False Pregnancy? 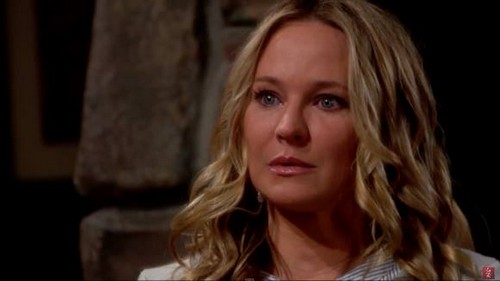 The Young and the Restless spoilers reveal that Summer 2015 is starting to sizzle with double the baby mama drama! TPTB at Y&R do not have a problem recycling story after story and it seems to be about the right time to recycle a double pregnancy baby story. The first expectant mama is Sage Warner [ Kelly Sullivan], Sage’s pregnancy is supposedly a miracle pregnancy as she was told she would never be able to conceive. Yet WHAM BAM and the Newman men beat down that impossible barrier! Sage has had a little bit of a rough road so far but seems to be out of the woods and back to work at the potential baby daddy Nick Newman’s [Joshua Morrow] bar.

The other newly announced impending stork drop is Sharon Newman’s [Sharon Case] as new boyfriend Dylan McAvoy just found out via an always reliable home pregnancy test that they are expecting. Sharon has had a rough past year. She had to face up to her DNA switching baby daddy drama with her ex fiance/husband Nick Newman and because of her horrible actions she lost Nick forever. Lucky Dylan has been there to pick up the pieces.

Young and Restless rumors and spoilers say Sage and Sharon become pregnancy buddies ….making it easier to steal a baby. As we all know Sharon is bipolar and when she is on her medication she does well… when she misses a dose or two you need to make sure all matches and lighters are accounted for.

Sage has also shown signs of being very off balanced with a secret hidden agenda – or maybe she is just a jealous diabolical person. In any case she is not the good, sweet misunderstood person she portrays. If anything these two wack jobs will make for interesting baby drama. And we all know Pratt loves crazy ladies. The double pregnancy story seems to be going the same route Y&R took when Faith was born, in other words, a baby switch!

Sage will do ANYTHING to keep Nick Newman and the cushy life he gives her and NOTHING or NO ONE will stand in her way except one thing that she cannot control anymore – her BIG FAT lies! Sage’s has told great lies about who Gabe Bingham is and perhaps holds other dark secrets – and from the way things are going with Flack, Jack and Victor it appears as if those lies will surface soon.

Will the stress of the truth about Gabe being Adam Newman cause Sage to miscarry what is already a very touchy pregnancy OR will a potential Adam announcement that he could be Sage’s baby daddy do it? Either way it looks like Sage will lose the baby – BUT will Nick Newman find out she lost the baby?

ABSOLUTELY not, Sage will lie cheat and steal to keep Nick and that is exactly what she might do in this case – steal Sharon’s baby!

Does Y&R want to go that route AGAIN with Sharon? Viewers know Sharon gave birth to twins and the doc told her the baby died [she did not know she had twins – Cassie and Mariah [Camryn Grimes] – but Sharon’s baby Faith was also stolen and given to Ashley [Eileen Davidson] as a newborn. All of which leads us to think that Y&R may make Sharon the perpetrator in this baby story line.

If Sharon is having a false pregnancy with perhaps early menopause triggering hormones to give a positive result she will NEVER tell Dylan since in her eyes that would make her a failure. A baby-less Sharon might be possessed to steal Sage’s baby, after all she did switch Summer’s DNA results so why not steal a baby? Sharon can always say she went off her meds… AGAIN. When the truth comes out Sharon can once again skate right on by Lady Justice as she will once again blame it on the meds.

Which scenario do you think the writers will go with? Will Sage steal Sharon’s baby to keep Nick or is Sharon having false pregnancy results and not pregnant? In this case, will Sharon lose her mind again and steal Sage’s baby trying to pass it off as her own? Stay tuned to CBS’s Y&R for lots more Summer baby drama! Please leave your thoughts in the CDL comments below