BY Heather Hughes on May 19, 2015 | Comments: 3 comments
Related : Soap Opera, The Young and the Restless 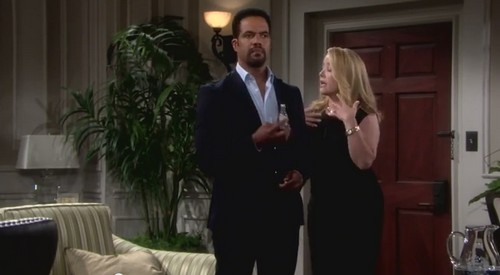 “The Young and the Restless” spoilers for Wednesday, May 20, tease that the mystery surrounding the Y&R cabin killer will take an interesting turn. Paul (Doug Davidson) will inform the gang that the FBI says there was a false match and it seems the drug lord isn’t connected to the murders. Kevin (Greg Rikaart), Kyle (Lachlan Buchanan), Summer (Hunter King) and Mariah (Camryn Grimes) will head over to Crimson Lights where they’ll mull over the updates on the case. Kevin will suggest that he should hack into the FBI database to see if the DNA match results were tampered with. Mariah will think it could put all of their lives in jeopardy, but it’ll be clear that Kevin is a man with a plan.

Back at the police station, Christine (Laralee Bell) will be upset over the recent loss of her child and Paul will urge her to take things one day at a time. Christine will say they should get away for a while, but Paul will think it’s best that he goes to Washington to sort everything out with the FBI. Christine will agree to accompany Paul on his trip.

Meanwhile, Sage (Kelly Sullivan) will inform Chelsea (Melissa Claire Egan) and Gabriel (Justin Hartley) that she won’t be living with Nick (Joshua Morrow), but he’ll be helping her with the baby. When Chelsea and Gabe are alone, she’ll tell him that she knows it must have been hard to hear Sage’s news. Gabriel will say that he never loved Sage and talk will turn to their thoughts on Victor (Eric Braeden) being the child’s grandfather. They’ll also discuss Victoria’s (Amelia Heinle) rejection of Chelsea’s designs. Gabriel will imply that Victoria is just angry about his new position in the company. Gabe will add that Chelsea should approach Jack (Peter Bergman) with her ideas.

Victor will confront fake Jack about Austin (Matthew Atkinson) and Courtney’s (Kelli Goss) murders. Fake Jack will deny any involvement, but Victor will think Austin came across something incriminating while doing his documentary. Austin could have easily been taken out for what he knew. Fake Jack will argue that Victor could have set him up to make sure he plays by the rules. Victor will think that’s absurd and he’ll make it clear that this is fake Jack’s last chance to straighten up. After Victor exits, Chelsea will show fake Jack her designs and discuss the problems she’s having with Victoria. Fake Jack will double Chelsea’s budget and allow her to move forward with her men’s line as well as her children’s line. Chelsea will be excited about fake Jack’s approval and he’ll indicate that he has faith in her. Fake Jack will take Chelsea’s hand and she’ll give him a strange look – she is uncomfortable with the intimacy!

Other “Young and the Restless” spoilers reveal that Neil (Kristoff St. John) will try to convince Nikki (Melody Thomas Scott) to go to rehab. Nikki will refuse and she’ll jog Neil’s memory of the horrific ordeal that resulted when she tried to make him get help. Victor will arrive and think Neil is turning Nikki back to alcohol. Neil will protest that it isn’t what it looks like, but Victor will order him to leave. Nikki will yell that Victor’s the one who’s driving her to drink and she’ll throw bottles across the room. Victor will demand that Nikki return home with him, but she’ll say he should leave. Victor will find Neil and express gratitude that he was there for Nikki. Neil will say that this situation is beyond their control. It sounds like Nikki will have to hit rock bottom before she makes a change.

At The Underground, Nick and Sage will imagine how Gabriel might be feeling now that he knows about the pregnancy. They’ll also discuss potentially disapproving members of the Newman family. Nick will promise to take care of everything. Gabriel will show up and speak to Sage alone. Gabe will suggest that the baby could be his, but Sage will argue that they only slept together once. Gabriel will reply that once is all it takes and he’ll declare that he wants a paternity test. Sage will hint that this could mess up Gabriel’s plans with Chelsea and Connor (Michael and Nolan Webb). Sage does have a point. Y&R rumors say that Chelsea will soon find out that Gabriel is actually Adam. If Chelsea learns that Adam got Sage pregnant, it could really be a double whammy. Stay tuned to the CBS soap to see just how much trouble this baby could cause.

The Young and the Restless Video preview scenes from May 20, 2015 episode!