BY Heather Hughes on May 19, 2015 | Comments: 3 comments
Related : Soap Opera, Spoiler, Television, The Young and the Restless 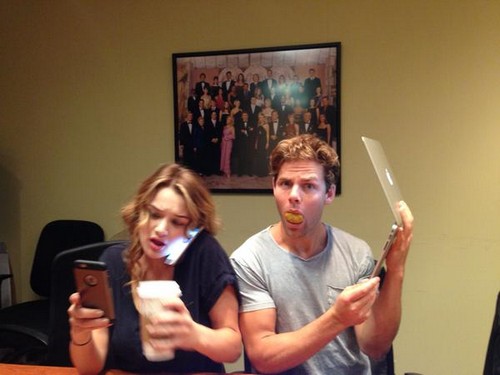 “The Young and the Restless” spoilers for Tuesday, May 19, tease that Nikki (Melody Thomas Scott) will wrestle with guilt over her part in Victor’s (Eric Braeden) plan. Nikki will confess to Victor that she wants to take a drink every time she sees him. Victor will tell both Neil (Kristoff St. John) and Nikki that there’s no need to feel guilty. Nikki will indicate that she’ll be staying at the athletic club, but Victor will insist that she should go home. Neil will try to offer Nikki his support, but it looks like things are only going to get worse. When Neil stops by Nikki’s room a little later, he’ll see that she’s drunk. Neil will get Nikki some coffee and she’ll share how upset she is that Victor pressured her to break the law. Neil will assure Nikki that Victor loves her and she’s the only one who can get through to him.

Fake Jack (Peter Bergman) will talk to Kyle (Lachlan Buchanan) and Ashley (Eileen Davidson) about his plans for the future at Newman Abbott. Billy (Burgess Jenkins) will approach fake Jack and demand to know who he is and what he’s done with his brother. Fake Jack will say that he wants to bring Billy back at the company and Ashley will agree that it’s a good idea. Billy will accept the offer and they’ll shake hands. When fake Jack is alone with Kyle, he’ll ask him to deliver an envelope and add that Kyle is the future of the company. Kyle will mention that the cops are getting closer to learning the identity of the cabin killer and fake Jack will inquire about it. As Victor eavesdrops nearby, Kyle will say that the police have DNA evidence. Victor will interrupt their discussion and Kyle will depart. Victor will accuse fake Jack of killing Austin (Matthew Atkinson) and Courtney (Kelli Goss). It sounds like trouble is brewing for fake Jack.

Meanwhile, Gabriel (Justin Hartley) will argue with Victoria (Amelia Heinle) about tweaking the budget. Gabe want to double Chelsea’s (Melissa Claire Egan) funds for her line, but Victoria will be firmly against giving extra money to his “bed buddy.” When Chelsea arrives, she’ll say that she never asked for a higher budget and indicate that Gabriel shouldn’t place her in the middle of all this. Gabe will counter that Chelsea should accept the budget increase. Ashley will arrive with Billy and they’ll share the news that Billy is back at the company. Victoria will be pleased that Billy will be around again. Ashley will tell Victoria that she thinks the money should be spent on Hex rather than expanding Chelsea’s line. Gabriel will say that the company can put more money towards both. Ashley will hint that Victoria needs to be more proactive in the situation with Gabe.

Other “Young and the Restless” spoilers reveal that Dylan (Steve Burton) and Sharon (Sharon Case) will discuss leaving the past behind. Later, Nick (Joshua Morrow) will give them updates on Sage’s (Kelly Sullivan) pregnancy. Sharon will hug Nick and offer her congratulations before ducking out. Nick will feel like Sage’s pregnancy is bothering Sharon, but Dylan will say that she’s just concerned about Faith (Aly Lind). Nick will ask Dylan if he’s sleeping with Sharon.

Sharon will visit Sage and tell her that she’s happy for her. They’ll hug and Sharon will indicate that she’s glad they’re all moving on. Sage will go tell Nick about Sharon’s actions and he’ll declare that he’ll protect Sage and the baby. Chelsea and Gabriel will walk in and overhear them talking. Gabe will be shocked and say that Sage’s pregnancy is impossible. Sage will reply that it’s a miracle and Nick is supporting her through this. Gabriel will look distressed by the news. In fact Gabriel will demand that Sage take a paternity test! Y&R viewers have already started guessing who they think the father of Sage’s baby is. Will it be Nick or Gabriel? The rumors have been mixed on where this paternity storyline is going. Stick with the CBS soap to learn the identity of the “baby daddy.”