BY Amanda Austin on May 17, 2015 | Comments: 4 comments
Related : Soap Opera, Spoiler, Television, The Young and the Restless 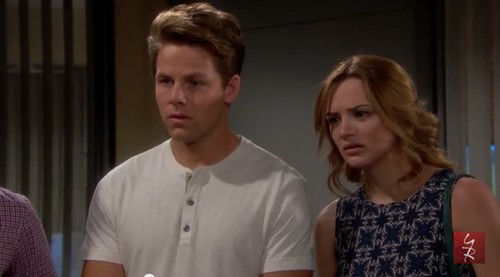 “The Young and the Restless” spoilers for the week of May 18 – 22 tease some action-packed episodes full of drama, and according to Y&R rumors fans will not want to miss a single second. Sharon Newman (Sharon Case) has had a rough couple of months on the CBS soap, during the week of May 18 things begin to look up for Sharon when she and Dylan’s (Steve Burton) relationship progresses and the Genoa City Police Department get a new lead on Austin (Matthew Atkinson) and Courtney’s murder case. Y&R spoilers reveal that Sharon and Dylan are thrilled when they learn that the police think the killer is a South American drug lord named Marco.

According to “The Young and the Restless” spoilers, Sharon’s happiness doesn’t last long when she realizes that Sage (Kelly Sullivan) and Nick Newman are hiding something from her. Before the week of May 18 is over, Nick (Joshua Morrow) will sit Sharon down and reveal that Sage is pregnant. Sharon won’t be the only woman in Genoa City having a tough week, according to Y&R spoilers Michael Baldwin (Christian LeBlanc) refuses to work things out with his wife Lauren Fenmore (Tracey Bregman) – and he actually serves her with divorce papers.

In other “The Young and the Restless,” news, spoilers tease that during the week of May 18 the rivalry between Chelsea (Melissa Claire Egan) and Victoria (Amelia Heinle) will continue to heat up. Victoria is floored when Gabe (Justin Hartley) has the audacity to ask her to double Chelsea’s budget on her new fashion line. The two women wind up in another screaming match before the week is over, and Chelsea accuses Victoria of sabotaging her work because she is still bitter about Chelsea hurting Billy Abbott (Burgess Jenkins). According to “The Young and the Restless” spoilers the week will end with a huge Newman-Jabot Merger party, and an unexpected visitor will arrive and chaos will ensue. Could this unexpected visitor be Jack? Y&R rumors say that Jack escapes and Kelly dies really soon – like this  week! Furthermore, CDL is aware that Cady McClain stopped filming several weeks ago which fits with Jack’s return to Genoa City this week.

So Y&R fans, how do you think Sharon will react when she learns that Sage is pregnant? What do you think a South American drug lord was doing in Genoa City – is Marco really Austin’s killer? Is this the end of Michael and Lauren, will they really go through with the divorce? And, who do you think crashes the merger party – could Jack finally escape from his insane captor and appear at the party? Or do you think just maybe Austin in not really dead and it’s him? Let us know what you think in the comments below and don’t forget to check CDL tomorrow for more “The Young and the Restless” spoilers and news!

See The Young and the Restless video spoilers for Monday May 18, 2015