The Young and the Restless Spoilers: Kelly Washed Out To Sea in Deadly Storm, Jack Escapes and Returns to Genoa City?

BY Cheri Magistro on May 18, 2015 | Comments: 6 comments
Related : Soap Opera, Spoiler, Television, The Young and the Restless 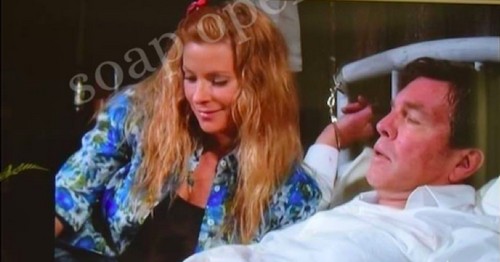 The Young and the Restless spoilers are cranking up some exciting news that is sure to blow you and some characters away! We are hearing that an imminent tropical storm is heading towards Jack Abbott’s [Peter Bergman] Island of Misery. More YR rumors are floating around that one of residents of that deserted island will not survive the storm’s fury!

According The Young and the Restless spoilers and rumors, the unexpected storm has Kelly Andrews [Cady McClain] unable to maintain control of herself or her prisoner Jack Abbott. When the tides turn extremely rough, Jack and Kelly fight for their lives in hopes of withstanding the brutal hurricane force winds and flooding. Unfortunately, the weather isn’t playing kindly and we are hearing that Kelly is washed out to sea by an extremely high tide, presumably and hopefully drowned. Jack finds himself alone, confused and frustrated, but with the encouragement and support from his ghostly father figure, the late great John Abbott [Jerry Douglas] our hero Jack finds himself back home in Genoa City in no time. Note that Cady McClain stopped taping Y&R a couple of weeks ago which means that Jack’s escape is around the corner.

Additionally, in more late breaking Young and the Restless news, reports are giving us a tease into what the real Jack Abbott has to deal with now that he has returned back to GC. To Jack’s utmost surprise, he has a “twin” living his life along with all the perks of being an Abbott. Poor Jack has to witness the fake Jack playing house with his wife, Phyllis [Gina Tognoni], interacting with his family members, and even running the newly merged Newman Abbott. The hardest part for Jack to believe? The family company his father built from the ground up is now in the hands of an impostor and his arch enemy, Victor Newman [Eric Braeden].

We also learn that the only person who can help Jack regain his own life, family, and company back, is his dear friend, Adam Newman [Justin Hartley]! Adam is the one person Jack knows, without any question who can help him reclaim his life and will know beyond a shadow of a doubt which Jack is the real Jack. As CDL reported long ago the one flaw in Victor’s plan was that he didn’t know that Gabriel is Adam and told this to the real Jack! This is something the impostor Jack doesn’t know and will allow the real Jack to prove to Adam his identity!

Now that Adam is working in a high level position at Newman Abbott, he will be able to hopefully figure out Victor’s next plan of action. This way Jack can be ready to take on the Black Knight and regain control of Jabot (and his wife) so they will be back in the right hands. What about dearest Kelly, can she truly be gone this time around? As you well know, characters on soap operas usually have 9 lives, so don’t be surprised if Kelly pops up in the near future, soggy but alive. She still has a few more lives! According to “The Young and the Restless” spoilers the May 18, 2015 week will end with a huge Newman-Jabot Merger party, and an unexpected visitor will arrive and chaos will ensue. Could this unexpected visitor be Jack? Stay tuned to CDL for more Young and the Restless spoilers and news!