BY Heather Hughes on May 12, 2015 | Comments: 3 comments
Related : Soap Opera, Spoiler, Television, The Young and the Restless 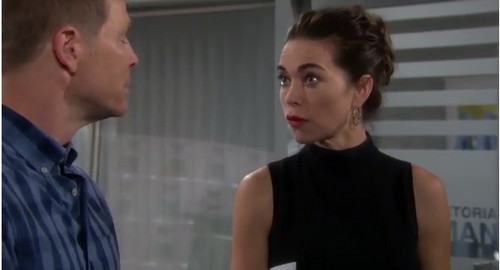 “The Young and the Restless” spoilers for Wednesday, May 13, tease that Sage (Kelly Sullivan) will tell Nick (Joshua Morrow) she’s pregnant with his baby. Nick will be confused since he thought Sage couldn’t have children. Sage will say she’s surprised as well, but she has a doctor’s appointment to confirm it. Sharon (Sharon Case) will interrupt and Sage will excuse herself. Sharon will discuss the possibility of sharing custody of Faith (Aly Lind). Nick will think Sharon is still unstable. After all, Sharon impulsively showed up at The Underground when she was under house arrest. Sharon will bring up the fact that Nick punched a reporter and he’ll consider the idea of shared custody. However, they’ll have to talk about it some other time. Sharon will say Nick should steer clear of Sage for Faith’s sake.

Sage will visit her doctor and she’ll have flashbacks of sleeping with Nick and Gabriel (Justin Hartley). The doctor will give Sage confirmation that she’s pregnant. Sage will indicate that the baby’s father is a wonderful man who will make a great dad. Sage will give Nick the news and she’ll say that she doesn’t expect anything from him. Nick will insist that he wants to play a role in the child’s life, but he has to break this to Sharon and Faith gently. Sage will agree to keep quiet until Nick can find a way to tell them.

Meanwhile, Gabriel will demand answers from Victor (Eric Braeden) outside fake Jack’s (Peter Bergman) hospital room. Gabe will hint that Victor was planning on killing Jack with the syringe in his hand. Victor will indicate that he found it on the floor and Gabriel should just forget about it. Gabe will say he can forget, but Victor will have to pay a price. Victor will wonder what it’ll take and Gabriel will say he wants a job above Victoria. Victor will suggest that Gabriel might want to think twice about threatening him. After all, Gabe might have a few things he’d like to keep quiet as well. Gabriel will walk into fake Jack’s room and ask if he thinks Victor knows who he really is.

Fake Jack will seem confused and reply “Who are you really?” Gabriel will tell Jack’s doppelganger to get some rest and he’ll take off. Victor will return and fake Jack will argue his worth. Fake Jack will say he’s the one person who can discover Gabriel’s true identity. Phyllis (Gina Tognoni) will stop by fake Jack’s room with an album full of mementos to jog his memory. Fake Jack will tell Phyllis that he remembers Istanbul and he loves her.

At the lab, Billy (Burgess Jenkins) and Victoria (Amelia Heinle) will bicker about the merger contract. Billy will get a phone call and he’ll say that it could provide proof that Jack’s signature was forged. The expert who examined the signature will say that the results were inconclusive. Billy will imply that Victor is definitely capable of doing something like this and Victoria knows that deep down. Chelsea (Melissa Claire Egan) will stop by and speak to Billy alone. Chelsea will bring up Connor (Michael and Nolan Webb) and Billy will promise to be there for him. Billy will add that he’s sorry he publicly humiliated Chelsea. Later, Billy will show up to question fake Jack about the merger contract and he’ll confirm that he signed it. 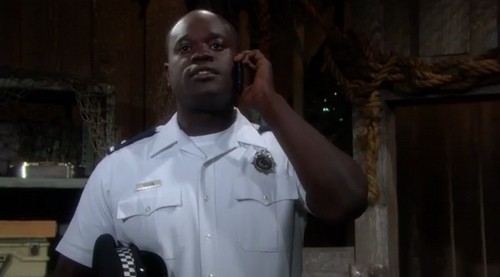 Other “Young and the Restless” spoilers reveal that the real Jack will overhear a policeman calling Victor. The cop will assure Victor that everything is under control and he can stay in Genoa City. Jack will say that’s where he lives and he has to get back there. When Jack asks where Kelly (Cady McClain) is, the policeman will assure Jack that his wife will be back soon.

Victoria will ask Victor about the signed merger contract that suddenly surfaced. Victor will say that Billy’s the one who’s responsible for filling Victoria’s head with the crazy idea of the forgery. Victor will add that he thought he could count on Victoria, but now he thinks it’s best to bring in someone else. When Gabriel comes in, Victor will indicate that they’ll both have the same title and compensation. Victoria will be outraged and she’ll argue with Gabe. Chelsea will arrive and urge them to tone it down. Victoria will say the children’s line that Chelsea designed isn’t going to happen and she should focus on the men’s line. Victoria will order Chelsea to leave so she can have a discussion with Gabriel.

Gabe will remind her that she’s not the only one in charge now and she should never talk to Chelsea like that again. It looks like Gabriel is still scheming to get close to Chelsea in every way possible. However, the rumors say everything could fall apart when Chelsea gets updates on Gabe’s true identity. Will Chelsea blow her top when she learns that Gabriel is actually Adam? Stay tuned to Y&R to see if Chelsea will be able to move past Adam’s lies.

Enjoy The Young and the Restless Video Preview for the May 13, 2015 episode below.