‘The Young and the Restless’ Spoilers: Nikki Breaks Law With Fraud, Michael Arrested with Prostitute, Devon and Hilary Make Love

BY Heather Hughes on May 8, 2015 | Comments: 5 comments
Related : Soap Opera, Spoiler, Television, The Young and the Restless 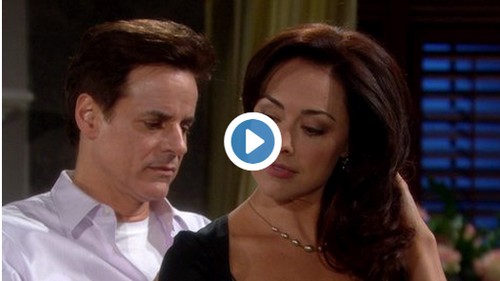 “The Young and the Restless” spoilers for Friday, May 8, reveal that Billy (Burgess Jenkins) will have a chat with Victoria (Amelia Heinle) about the merger contract. Billy will say that he hasn’t been able to locate it and he’ll wonder if it was even signed. Billy will ask Victoria to question Victor (Eric Braeden) about it and report back to him.

Meanwhile, Ashley (Eileen Davidson) will discuss the merger contract with Phyllis (Gina Tognoni). Ashley will indicate that without a signed contract, there’s no Newman Abbott. Phyllis will accuse Ashley of hoping that Jack (Peter Bergman) doesn’t wake up so she can take over the company. Ashley will go to fake Jack’s room and speak to him as he lies unconscious. Ashley will hint that that she’s going to do some questionable things, but it’s for the good of Jabot and their father. Abby (Melissa Ordway) will tell Phyllis that she understands where Ashley is coming from and she’ll remind her that there are two sides to this situation. Later, Kyle (Lachlan Buchanan) will ask Phyllis if she blames him for the crash, but she’ll make it clear that it’s not his fault. Phyllis will be confident that Jack will come back to them and Kyle will echo her hope.

Other “Young and the Restless” spoilers tease that Nikki (Melody Thomas Scott) will tell Victor and Neil (Kristoff St. John) that she feels sick about everything that’s happened to Jack. Victor will abruptly tell Nikki that he wants her to sign the merger contract as a witness. Nikki will be suspicious since she didn’t see Jack or Victor sign it. Victor will say that he’d planned to have the three of them sign it together, but Jack wanted to sign it right away. Nikki won’t be sure if she should, but Victor will finally convince her to go ahead and sign. Hilary (Mishael Morgan) will show up with some papers and Neil will take them.

After an awkward silence, Hilary will leave and Neil will open up to Nikki about Hilary and Devon’s (Bryton James) affair. They’ll also discuss their sobriety. Neil will hint that it’s been a struggle, but Nikki will say she’s not feeling tempted. When Nikki says she’s getting stronger each day, Neil will indicate that he’s proud of her. Nikki will glance at some liquor nearby. The rumors say that both Neil and Nikki will get burned by Victor and they’ll end up turning back to the bottle. It may even result in the drunken mistake of having sex. Stay tuned to the CBS soap to see if Neil and Nikki will fall off the wagon.

At the lab, Victor will pop in with the signed contract and say that the merger will move forward as planned. Victor will show them that everything is official, but Billy won’t buy it. Billy will look at the contract and protest that the signature isn’t Jack’s.

At the athletic club, Michael (Christian LeBlanc) will thank Felicity (Lindsey McKeon) for coming and she’ll say to call if he needs her services again. Lily (Christel Khalil) will overhear and contact the police. Michael will be arrested and Lauren (Tracey E. Bregman) will head to the station. Cane (Daniel Goddard) will tell Lily about Michael and Lauren’s relationship troubles. When Cane leaves, Lily will confide in Devon about how close Cane is getting to Lauren. It’s going beyond just work and Lauren has cheated in the past. Devon will insist that Cane will remain faithful to Lily.

Lauren will take care of Michael’s bail and demand some updates on what’s going on. Michael will say he paid a hooker because he needed to get away from the pressures of their relationship. Lauren will shout at Michael for choosing to have sex with a stranger instead of a wife who loves him. Cane will find Felicity and she’ll inform him that she didn’t have sex with Michael. All they did was talk. When Cane confronts Michael, he’ll say that he can no longer be the husband Lauren deserves and their marriage is over. Back at the athletic club, Lauren will ask Lily where Cane is. Lauren will say that she wants to work and she’ll add that Cane has been a Godsend for her. When Cane arrives, he’ll tell Lauren that Michael needs time to work out what he’s dealing with. Lily will watch Cane consoling Lauren. It’s clear Lily isn’t too keen on them getting so cozy. Stick with Y&R to see if Cane and Lauren will be tempted to cheat.