The Young and the Restless Spoilers: Austin Framed Sharon For His Alleged Murder – Killed Courtney To Hide He’s Still Alive?

BY Janette E Smith on May 10, 2015 | Comments: 8 comments
Related : Soap Opera, Spoiler, Television, The Young and the Restless 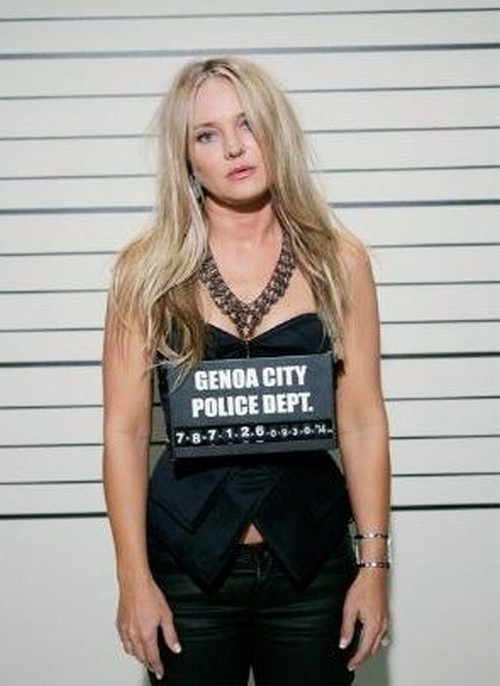 The Young and the Restless spoilers looks more closely at the Austin and Courtney murders and exactly the role that Sharon might play in this Y&R tangled web. What if Sharon does think she killed Austin? That would mean Sharon assaulted Austin on that creepy night she and Faith took a drive because electricity went out from the blizzard. Sharon was crazy livid over Austin wanting to expose her interview bashing her ex husband Nick Newman and exposing the Sondra Allen scandal.

Sharon was desperate over what her big spiteful mouth had revealed and she tried bribing Austin, yelling at him and threatening but it did not deter the vengeful lad – he was bringing the high and mighty Newmans down no matter what and Sharon was just collateral damage. Sharon felt this jeopardized her custodial agreement with Nick over Faith – she would most likely not get to see her daughter and if so, only on supervised visits. The threat of losing daughter Faith became too much to bear for the self-indulgent unstable Sharon. Sharon is 100% a ‘the end justifies the means’ kind of person.

Sharon as her Y&R obsessive self went looking for Austin at the cabin and she left a sleeping Faith in the car . She found Austin and they argued again as she demanded he turn everything over to her and not publish the tapes. Of course Mr. Revenge said no way but this time things got physical and Sharon knocked him out with the bookend!  The Young and the Restless might reveal that in her panic and adreneline rush Sharon dragged Austin into the armoire leaving a message in lipstick. Interesting it would be lipstick she would write in. The last time lipstick was involved was when crazed Sharon shoved Phyllis down the stairs and her lipstick rolled out and and that was her first memory of that crime.

Back to this crime… after she ‘murdered’ Austin Sharon got back in the car with Faith, waking the child up, and that is when Faith remembered going through the forrest. Sharon believes she killed Austin – note how afraid and guilty she always appears about that lonely night drive through the blizzard – BUT he wasn’t dead! Austin still had residual roofie in his system from when Fen spiked the punch which slowed down his heart beat. When the Scooby Doo Gang found him they thought he was dead. Austin later planted that bloodied body in the car to complete his disappearing ‘I was murdered’ act. 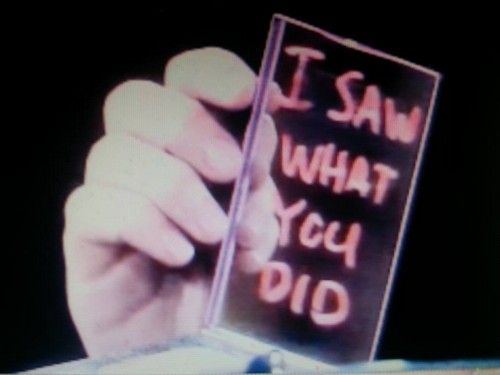 Austin leaves the scene after the gang take him out to lie in the snow and he starts his quest on setting Sharon Newman up for his murder! Sharon was caught trying to steal Austin’s laptop at Crimson Lights …the Scooby Gang caught her, and she made up some lie that she wanted to do some on-line shopping. I mean seriously – LOL. Sharon acts guilty and she looks guilty (Sharon Case is a GREAT actress) because she thinks she is guilty of killing Austin. Even though Noah keeps his mom informed as to what is going on she continues to look guilty…but why? Because Sharon is convinced she did kill Austin.

Sharon has been leaving red lipstick messages warding off the Scooby Gang from delving into the murder, even going as far as hitting Abby in the park like she hit Austin. Sharon will do anything when she gets desperate she has proven that over and over on The Young and the Restless over the years. When it comes to Faith, simply forget about it, there is NOTHING Sharon won’t do.

Austin has been keeping close tabs on Sharon… he wants her to pay for what she did to him and even more, if she is found guilty of his murder it signals the end of any investigation into the matter, protecting his dead identity. One big problem was that Courtney wouldn’t stop investigating and going through surveillance tapes. Poor girl came upon something that cost her life – she saw Austin alive! Courtney was ready to leave the cop shop to tell somebody and bam she gets knocked off, taken to the Abbott Cabin and put in the armoire.

Shortly after this Sharon is in her car and very emotional because she thinks no one believes her and she is afraid… its dark and all we see is a black leather glove wrap around her face from the back seat she is chloroformed. But why? Austin wants to pin Courtney’s death on Sharon as well as his own! Austin set Sharon up with Courtney’s necklace and put the crow bar in her hand while she was passed out and voila, prints on the crow bar. Since Sharon was already the prime suspect in Austin’s ‘murder’ he figured correctly she’d be a natural suspect for Courtney’s murder as well. So far Austin has done a pretty good job making Sharon look guilty – but then again if he were really dead she would be guilty according to this behind the scenes speculative storyline. Come back to CDL for more The Young and the Restless spoilers, news and updates.