BY Heather Hughes on May 11, 2015 | Comments: 7 comments
Related : Soap Opera, Spoiler, Television, The Young and the Restless 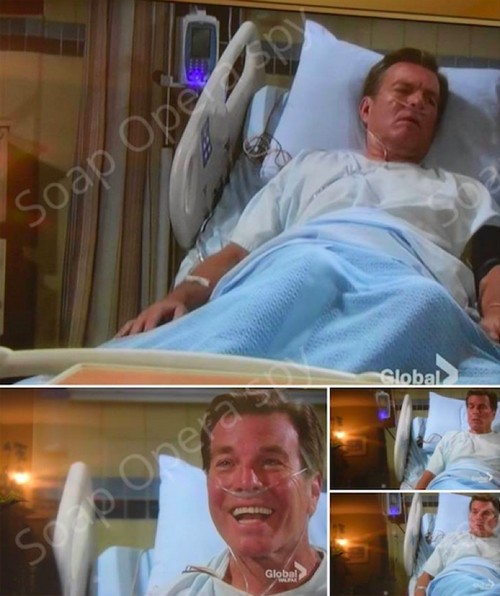 “The Young and the Restless” spoilers for Tuesday, May 12, tease that Kelly (Cady McClain) will continue to fight for what she wants. Kelly will tell Jack (Peter Bergman) that she drugged his water and he needs to let the magic happen. As soon as the drugs start to work, Kelly will try to convince Jack that they’re married and Phyllis (Gina Tognoni) is gone. Kelly will pull Jack out of bed and they’ll share a dance.

Meanwhile, Gabriel (Justin Hartley) will let Victor (Eric Braeden) know that he intends on being loyal to Jack. Victor will still urge Gabriel to be a mediator between the Abbotts and the Newmans. Gabe will declare that he won’t make a deal with the devil and he’ll storm out. Once he’s alone, Victor will pull up an article about Gabriel online. It looks like Victor is doing some digging into Gabe’s background and it could lead him to discover that Gabriel is actually Adam. Stick with Y&R to see if Victor will get updates on Gabriel’s true identity.

At The Underground, Nick (Joshua Morrow) will express concern that Sage (Kelly Sullivan) isn’t feeling well. Nick will advise her to eat something, but she’ll snap back that he shouldn’t tell her what to do. Nick will say that he still cares about Sage and he’d like to be friends. Gabriel will pop in and Nick will excuse himself. When Gabriel mentions that Victor wants to work with him, Sage will urge him to proceed with caution. Gabe won’t be able to resist boasting about how Chelsea (Melissa Claire Egan) called out Adam’s name when they were making love. When Chelsea arrives, she’ll have a chat with Sage alone. Chelsea will admit that she still loves Adam, but she’s focused on moving forward.

Other “Young and the Restless” spoilers reveal that Jack’s doppelganger will cause even more trouble. Fake Jack will come out of his coma, but he’ll say he doesn’t remember Phyllis. Dr. Shelby (Terrell Tilford) will say that he’s not sure if fake Jack will regain his memory. Billy (Burgess Jenkins), Ashley (Eileen Davidson) and Kyle (Lachlan Buchanan) will pay fake Jack a visit, but he’ll become agitated and send them all away. Later, Victor will show up and ask if he remembers that he’s Jack Abbott. Fake Jack will say that maybe he is or maybe he’s someone Victor hired from a Peruvian prison to play Jack. So Fake Jake’s memory and recall are just fine! Jack’s doppelganger will enjoy the “gotcha” moment and he’ll tell Victor that he’ll need some freedom if he’s going to continue the charade. Victor will indicate that he has Jack’s signature on the merger contract no longer needs him… alive – perhaps he should just let Jack’s family mourn him. Fake Jack will panic when Victor threatens to inject air into his IV line to give him cardiac arrest. When Victor pulls out a syringe with which to murder Flack, Gabriel will walk in and demand of Victor to explain what he is doing. Gabriel saves Fake Jack’s life.

Sharon (Sharon Case) will be released at the police station and she’ll thank Dylan (Steve Burton) for being so supportive through all of her legal troubles. Sharon will hint that he won’t have to watch over her now that she’s been cleared, but Dylan will make it clear that he values their friendship. At Sharon’s house, Nick will be waiting with Noah (Robert Adamson), Mariah (Camryn Grimes) and Faith (Aly Lind). They’ll have some cookies to welcome Sharon home. Nick will apologize to Dylan for refusing to believe in Sharon’s innocence. After everyone else leaves, Dylan will tell Sharon that Avery (Jessica Collins) will be staying with Joe for a while. Sharon will say that he deserves better and they’ll share another passionate kiss. Dylan will finally pull away, but he’ll decide to stick around.

Nick will return to The Underground to check on Sage. When Nick senses that Sage is upset, he’ll ask what’s wrong. Sage will tearfully give Nick the news that she’s pregnant. CDL told you that this pregnancy was coming. The question is: will the father be Nick or Adam? Stay tuned to the CBS soap to find out who the “baby daddy” is, given that Sage the liar actually is pregnant!

Enjoy The Young and the Restless video preview for May 12, 2015