BY Heather Hughes on May 15, 2015 | Comments: 5 comments
Related : Soap Opera, Spoiler, Television, The Young and the Restless 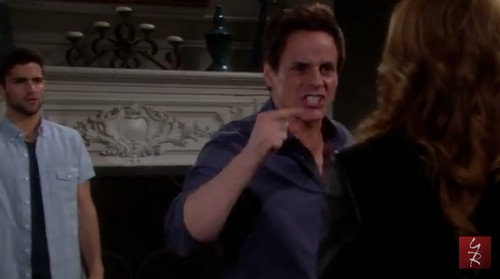 “The Young and the Restless” spoilers for Monday, May 18, tease that Sharon (Sharon Case) will wake up in bed and wonder where Dylan (Steve Burton) is. When Sharon sees that he’s just getting coffee, Dylan will explain that he’s not the kind of guy who would leave without saying goodbye. Dylan will say that he has “White Knight Syndrome” and he doesn’t want to hurt her. Sharon will say that she has a habit of wanting to be saved. They’ll agree to take things slow. Stitch (Sean Carrigan) will call Dylan about the new evidence in the case and he’ll share the news with Sharon before heading to the police station.

Paul (Doug Davidson) will inform Summer (Hunter King), Kevin (Greg Rikaart) and Kyle (Lachlan Buchanan) that there was a match for the fingerprint on the envelope. It belongs to the head of a South American drug cartel and this guy is ruthless. His name is Marco Anacelli (Peter Bergman) and no one has seen him in years. Dylan will show up and Paul will fill him in, too. Later, an agent with the FBI will arrive and announce that he’s taking over the investigation. Paul will insist that the agent tell him about any future developments. When Paul informs him that they also got DNA off the envelope, the agent will seem doubtful that it really belongs to Marco. This drug lord is too smart to leave a trail behind like that. Paul will be agitated that the agent isn’t taking this evidence seriously and he’ll indicate that he’s afraid the cabin crew will keep poking around.

Meanwhile, Nick (Joshua Morrow) will ask Sage (Kelly Sullivan) how she’s doing. Sage will say she hasn’t had any morning sickness. Nick will question where she’s going to live once the baby’s born. Sage will believe he wants her to move in with him and she’ll say that’s not going to happen. Nick will say Sage misunderstood and he just wants to make sure she has an appropriate place to live. They’ll agree to keep Sage’s pregnancy a secret for the time being. Later, Sharon will see Nick and Sage at the athletic club. Sharon will share that Paul has a lead in the case and a realtor will approach them. Sharon will realize that Nick has set up a meeting to look at houses and she’ll assume that Nick and Sage are moving in together. Nick will explain that it’s not what Sharon thinks and he doesn’t know what the future holds with Sage. Sharon will be concerned about what will happen to Faith (Aly Lind).

Dylan will step in and try to figure out what’s going on. Nick will indicate that Sage jumped to conclusions like she always does. Sharon will say she’s sorry and Dylan will provide updates on the new evidence in the case. When Nick leaves, Dylan will tell Sharon he understands why she doesn’t trust anyone, but he’ll let her know that she can trust him. Sharon will question whether their relationship is real or if they’re just leaning on each other during a difficult time. Nick will check on Sage and she’ll say that she threw up after seeing Sharon. Sage will be worried about Sharon finding out that she’s pregnant. Nick will believe that telling Sharon the truth will make things easier, but Sage won’t know if that’s such a good idea.

Other “Young and the Restless” spoilers reveal that Lauren (Tracey E. Bregman) will tell Fen (Max Ehrich) about her separation from Michael (Christian LeBlanc). Fen will confront Michael about the whole ordeal. Michael will start shouting that he can’t handle Lauren always being so demanding and he’ll bring up the fact that she cheated. Lauren will say that was a mistake, but Michael will reply that it’s over and hand her divorce papers. After Lauren departs, Michael will break down in tears.

At Crimson Lights, Kevin will talk to Summer and Kyle about Marco. They’ll try to understand why a drug lord would be involved in the cabin killings. Fen will show up and share what has happened with his parents. Kevin will comfort Fen while Summer talks to Kyle. Summer will say that she hates what Fen did, but she knows Austin (Matthew Atkinson) is really to blame. Kyle will notice someone has been watching them and he’ll demand to know who he is. Summer will recognize that it’s a guy who used to work at the lab and later spied on Jabot for Victor (Eric Braeden). He’ll say his name is Tobias (Jeffrey Christopher Todd) and he wasn’t spying on them. Tobias will add that he was just trying to get a cup of coffee. Kyle will apologize for his outburst and Tobias will say that whatever they’re freaked out about has nothing to do with him. The rumors say the cabin mystery has more twists ahead so Y&R viewers will want to stay tuned.

Watch The Young and the Restless video preview You Tube promo for Monday, May 18, 2015