BY Heather Hughes on May 14, 2015 | Comments: 5 comments
Related : Soap Opera, Spoiler, Television, The Young and the Restless 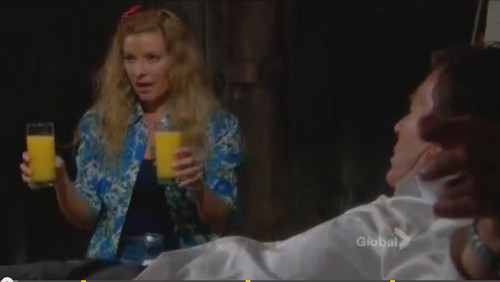 “The Young and the Restless” spoilers for Thursday, May 14, reveal that Kelly (Cady McClain) will drug Jack’s (Peter Bergman) orange juice and toast to their happy marriage. Jack will say that he wants to go home, but Kelly will remind him that everyone thinks he’s been lost at sea. Kelly will be adamant that Jack’s new life is with her. Jack will bring up Jabot and Kelly will discuss the merger. Jack’s father, John (Jerry Douglas), will appear as an apparition and urge Jack to ask questions about Newman Abbott. Jack won’t be sure what to ask, but John will assure him that he can figure it out.

Meanwhile, Ashley (Eileen Davidson) will give Stitch (Sean Carrigan) a hard time about his relationship with Abby (Melissa Ordway). Stitch will think Ashley has a problem with it, but she’ll say the real problem will be when he leaves Abby. Stitch will reply that they’re good for each other. Ashley won’t seem too convinced. The rumors say that Stitch and Ashley will end up sleeping together soon. Stay tuned to the CBS soap to see if they’ll make a big mistake.

At the hospital, Avery (Jessica Collins) will show up for updates on fake Jack and Phyllis (Gina Tognoni) will indicate that he’ll be released soon. Avery will talk about Joe’s (Scott Elrod) progress and how she came home to see Dylan (Steve Burton). Fake Jack will have a dream about being in prison in Peru. When fake Jack wakes up, Phyllis will wonder why he was yelling in Spanish. At home, Phyllis and fake Jack will be kissing when Ashley comes in. Fake Jack will declare that being near death changed him and he’s done being reckless. When Ashley gripes about the merger, fake Jack will suggest that he intends to keep Victor under control. Fake Jack will hug Ashley and leave the room. Phyllis won’t entirely buy fake Jack’s new attitude and she’ll tell Ashley that his sudden fluency in Spanish is suspicious. Fake Jack will have another dream about the Peruvian prison and he’ll shout that he’ll do anything to get out.

Other “Young and the Restless” spoilers tease that Sharon (Sharon Case) will question Dylan about where they stand. Dylan will promise that Sharon won’t lose him as a friend. After Dylan heads out, Sharon will discover his wallet on the couch. When she hears a knock at the door, Sharon will assume that Dylan came back for it. Avery will be standing outside and she’ll question if Dylan’s wallet fell out because Sharon was on top of him. Dylan will return and seem surprised that Avery is back in town. Avery will mention Dylan’s text that urged her to stay and hint that she probably should have listened. Sharon will confess that she sent the message and a shouting match will ensue. Dylan and Avery will leave to sort things out, but it looks like their relationship just isn’t going to work. Avery will accuse Dylan of being more than friends with Sharon, but he’ll reply that she just feels that way because she’s falling for Joe. Avery will say that they’re trying to fix something that can’t be fixed and she’ll give Dylan back the engagement ring.

At Crimson Lights, the cabin crew will discuss Sharon’s dropped charges and the fact that the real killer is still on the loose. Abby will think they aren’t in any danger, but Mariah (Camryn Grimes) and Kevin (Greg Rikaart) won’t be so sure. Someone will spy on the gang through the window as they mull everything over. Suddenly, they’ll get texts that tell them to come to the cabin and leave the police out of it. Kyle (Lachlan Buchanan) will want to get to the bottom of this right away. Stitch will arrive and learn that Kyle, Kevin, and Noah (Robert Adamson) have already left. Summer (Hunter King) will call Paul (Doug Davidson) and leave a message about what’s going on. At the cabin, the guys will be shocked to see Fen (Max Ehrich). Summer, Abby and Mariah will show up and Fen will inform everyone that he’s been in contact with the killer. It sounds like this could be a major break in the cabin case. Stick with Y&R to see if Fen’s news will hold the key to the mystery.