BY Janette E Smith on May 13, 2015 | Comments: 9 comments
Related : Soap Opera, Spoiler, Television, The Young and the Restless 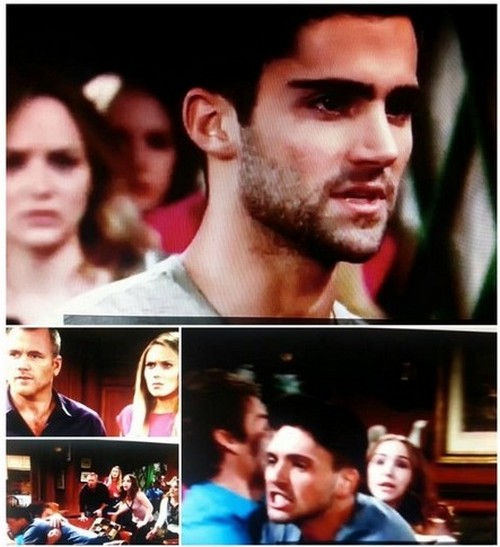 The Young and the Restless spoilers examine the possibility that Fen is the Cabin Killer guilty of Austin’s and Courtney’s murders. This week on Y&R we see Fen telling everyone he has been in contact with the killer – or is he trying to throw everyone off because he is the killer! Fenmore Baldwin has been a troubled lad his whole privileged life. The one thing that was constant with him was his obsession with Summer Newman although sadly for lad, Summer never really looked at him that way Fen always had eyes for Summer.

Every time a new guy would come into Summer’s life on The Young and the Restless, Fen would show his jealous side in a darkly humorous kind of way… he would sulk and he would be crass. Fen also turned to drugs and alcohol. During one of the last “adventures” Summer and Fen went on Fen ended up turning himself in with the help of Summer, telling his mom and dad where he was. He served a year in prison. Fen feels like a failure to his parents and life at this point but says he wants to finish school and become a Laywer like his dad. Was Fen just telling mom and dad what they wanted to hear ? What is Fen really doing back on campus?

Y&R history shows that Fen has never approved of anyone in Summer’s life because he always held a torch for her. When Summer married Austin Fen was angry and Summer knew it, he did not hold back his feelings. When Summer cried to him about Austin and Mariah kissing, Fen said good, maybe he’ll leave now. When Fen ran into his Uncle Kevin and told him what happened with Summer, Kevin sided with Summer, and Fen was upset. Fen has always been a sort of a loner. He always seems to be hiding something even if he is not.

Was it too much for Fen hearing that his dad, Michael Baldwin has stage 4 Cancer, did the wayward lad start hitting the booze and pills harder than ever causing black outs? On Valentine’s Day at the Abbott Cabin the Scooby Doo Gang were all playing a game called “never have I ever” and Summer says ‘Never have I ever had a crush on my best friend,’ hurting Fen’s feelings because these two have been best friends their whole life. Fen takes a drink in anger then lashes out to hurt Austin and says ‘Never have I ever committed murder.’ Austin was hurt because his mother had been murdered. Fen didn’t care because that’s the kind of guy he is.

The next scene is everyone passed out and coming to.. discovering Austin was dead. No one knows what happened at this point and then Noah finds an empty vile in the trash which Courtney wants to analyze BUT Fen steps in and admits he spiked the punch. Abby starts accusing Fen and yelling at him… Kevin butts in and reminds her that her past isnt exactly stellar. Fen claims he was knocked out too… but was he? Did he knock everyone out so that he could hide Austin’s body? Why should we believe that Fen was passed out with everyone – he is a recovering addict who just spiked everyone’s drinks. Fen hated Austin and maybe in his blacked out drugged state he committed murder, the very thing he said he had never done hours before.

Fen has quite the imagination especially having an uncle like Kevin who writes mysteries. So his lipstick threats, dead bodies in armoires all came naturally to him. Fen leaves as quickly as he showed up… but did he really leave? Fen could have easily had access to the Genoa City cop shop because his uncle Kevin works there. Fen could have swiped uncle Kev’s keys and voila, he is in. Fen knew Courtney would not give up and poor Courtney saw something that Fen did not want her to see. Fades to black and Courtney is dead, her body winding up at Abbott Cabin just like Austin’s.

During this whole murder mystery Fen has been gone, or has he? This week Fen comes back and claims the murderer has been in contact with him, even accusing Sharon of being the killer causing Noah to lose control and try to hit him. Note that when Sharon was chloroformed at the station the framer was wearing black gloves which appeared rather small and guess what, Fen has small hands! Was that Fen trying to throw the scent off from him? Stay tuned to CDL for more The Young and the Restless spoilers, rumors and news!

Watch the Young and the Restless spoilers videos preview for May 14, 2015 and all week!