The Young and the Restless Spoilers: Michael Baldwin’s Fate, Nikki and Neil Hooking Up, Sharon and Dylan Next Y&R Super Couple?

BY Amanda Austin on May 15, 2015 | Comments: 7 comments
Related : Soap Opera, Spoiler, Television, The Young and the Restless 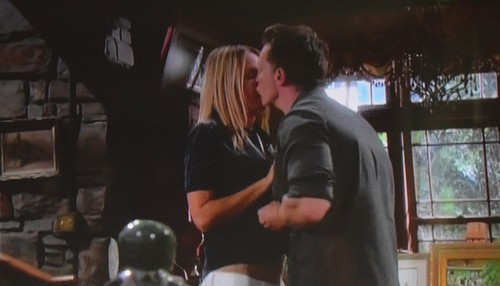 “The Young and the Restless” spoilers tease that fans of the CBS soap are in for some exciting upcoming storylines. Y&R executive producer Jill Farren Phelps and head-writer Chuck Pratt recently sat down with TV Insider’s Michael Logan for an exclusive interview and dished some exciting spoilers about some of the most controversial storylines currently on the CBS soap. Y&R Fans have been discussing Michael Baldwin’s cancer and the character’s fate for months on social media – and rumors have been flying that the iconic character will be killed off – but according to the showrunners, Michael Baldwin isn’t going anywhere.

“The Young and the Restless” fans were shocked last year when it was revealed that Michael Baldwin has prostate cancer – and since then Michael and his wife Lauren have had their ups and downs. On some days Michael appears to be healthy as a horse, and on other days he is fainting and skipping his treatments. Rumors have been floating around for months now that Christian LeBlanc is leaving “The Young and the Restless,” but Chuck Pratt revealed in the interview that LeBlanc’s character will not be dying on his watch. Pratt dished, “But this is a type of cancer that’s basically curable and everybody knows we’re not going to kill off Michael, so that meant we had to wrestle with complications.”

As far as the demise of fan favorite couple Michael Baldwin and Lauren Fenmore, “The Young and the Restless” spoilers tease that their marriage is definitely sinking faster than the Titanic. Jill Farren Phelps explained that Michael and Lauren and Cane and Lily’s marriages were becoming rather boring and they needed to spice them up by pushing Lauren and Cane together because, “Great love stories have to fall apart. They have to be challenged.”

In other “The Young and the Restless” spoiler news, fans have had a tough time getting past the fact that Frankenstein Jack Abbott – Victor’s monster, has been sleeping with Phyllis. The word “rape” has been tossed around a lot among Y&R fans online because the doppelganger is basically tricking Phyllis in to sleeping with him under false pretenses. Chuck Pratt discussed the complicated storyline with Michael Logan and reassured fans that someone, presumably Victor, will be paying the price – the crime is not going to unpunished.

“The Young and the Restless” spoilers and rumors have been teasing a possible romantic connection between Neil Winters and Nikki Newman for several weeks now – and according to the Y&R showrunners, that is definitely a possibility. Neil and Nikki have bonded over their recent drinking benders and crime spree – and we weren’t imagining the sparks flying between the two characters. Pratt dished, “It’s a fascinating relationship between codependent alcoholics and we will continue to play that, getting deeper and deeper into it. It’s controversial and that’s why we like it.”

Another controversial couple that seems to be causing a lot of raucous among fans is Sharon Newman and Dylan McAvoy, when spoilers first began hinting that the two characters would be hooking up – there were mixed feelings about the pair. According to Phelps, the Y&R writers are going full steam ahead with the new couple – because Sharon “needs saving” and Dylan is “a saver.” As far as all of the talk on the internet about the Y&R writers giving Sharon Case poor storylines and turning her character in to a villain – Jill Farren Phelps insists that Sharon Case loves playing a crazy woman – and she never complains about what they give her to work with.

So Y&R fans, do you believe that Michael Baldwin won’t be killed off – or do you think the showrunners are just trying to keep Christian LeBlanc’s exit a secret for now? How do you feel about the writers simultaneously breaking up the two most solid marriages on Y&R – Cane and Lily and Lauren and Michael? Would you be intrigued by Neil and Nikki hooking up? What about Sharon and Dylan – are they the next super couple on the CBS soap? Let us know what you think in the comments below and don’t forget to check CDL tomorrow for more “The Young and the Restless” spoilers and news.

Watch The Young and the Restless video preview spoilers for May 15, 2015!