The Young and the Restless Spoilers: Phyllis Back In Coma After Victor Syringe Stab – Ashley Panics Over Love Potion Loss? 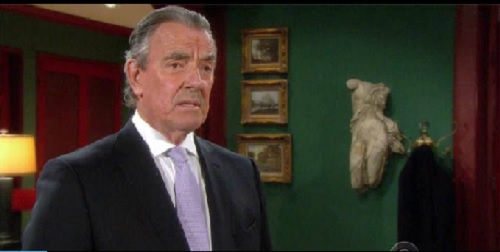 “The Young and the Restless” spoilers for the week of January 26 tease some exciting drama in Genoa City – and Victor Newman is up to no good…again. The all new weekly Y&R spoiler video teases, “He (Victor) is ruthless, and merciless, but this week he will go too far.” Victor Newman seems to have rubbed everyone in s Genoa City the wrong way this month – and he will spend the week of January 26th feuding with literally half of the characters on the CBS soap.

According to “The Young and the Restless” spoilers – Victor ups the ante in his ongoing feud with the Abbott Family and Jabot Cosmetics. In the all new spoiler video for the week of January 26, a panicked Ashley Abbott snaps at her brother Jack, “Victor is not going to win.” Victor (Eric Braeden) has been spying on Jabot for quite a while and has been desperate to get his hands on the new formula they developed for their secret love potion – and judging from Ashley Abbott’s panic in the spoiler video, Victor may have finally gotten it. “The Young and the Restless” spoiler video for the week of January 26th also teases that Victor’s feud with Jill (Jess Walton) over Chancellor will be reaching a boiling point as well. Jill sneers to Victor, “I’m going to fight,” and the Newman matriarch laughs back, “Then you will go down in grand fashion.”

Jill and Ashley Abbott (Eileen Davidson) are not the only ones who have a serious bone to pick with Victor Newman though – apparently Phyllis has few things to hash out with the villain. She recently discovered that she may really be losing her marbles because of the drugs that Victor forced Dr. Cutler to administer to her, and it looks like she isn’t very happy that Victor woke her up out of the coma without taking in to consideration the consequences it would have on her health. In the “Young and the Restless” spoiler video for this week Victor taunts Phyllis that “maybe she should go back in to a coma” and stabs her in the hand with a syringe.

We’re a little puzzled as to why Victor would want to put Phyllis (Gina Tognoni) back in a coma – is she really bothering him or that much of a threat to him? Do you think that Phyllis may be having a hallucination or a dream? Or does Victor really put her back in a coma? Let us know what you think in the comments below and don’t forget to check CDL tomorrow for more “The Young and the Restless” spoilers and news.