BY Heather Hughes on May 14, 2015 | Comments: 3 comments
Related : Soap Opera, Spoiler, Television, The Young and the Restless 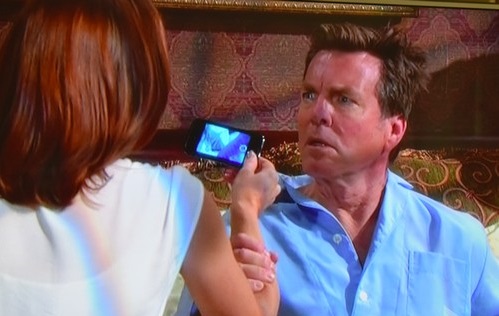 “The Young and the Restless” spoilers for Friday, May 15, tease that Fen (Max Ehrich) will reveal how he’s been in touch with the cabin killer. Fen will say he was in danger of failing so he hacked into the school’s database and changed his grades. The killer found out about it and sent Fen an anonymous text message. Fen was blackmailed into spiking the punch at the Valentine’s Day party. Paul (Doug Davidson) will burst through the door and order everyone to freeze. Summer (Hunter King) will say that Fen is the one Paul wants. Fen will spill the story to Paul and give him the envelope that contained the drug vial. Abby (Melissa Ordway), Summer, and Kyle (Lachlan Buchanan) will blame Fen for helping with the killings, but Kevin (Greg Rikaart) will urge them to show some compassion. Later, Paul will run the fingerprints from the envelope through the system at the police station. The screen will say there’s a confirmed match and Paul will declare “We got you.”

Meanwhile, Phyllis (Gina Tognoni) will catch fake Jack (Peter Bergman) having another nightmare. Phyllis will film fake Jack speaking in Spanish and calling out Victor’s (Eric Braeden) name. Fake Jack will wake up and demand to know what’s going on. Phyllis will express her concern and fake Jack will twist her wrist. Fake Jack will take a shower and Phyllis will call Victor to come take a look at the video she shot. When fake Jack comes downstairs, Victor will say that maybe the stress of the merger is too much for him and they should call it off. Fake Jack will reply that Phyllis is just being overprotective and everything will work out fine. 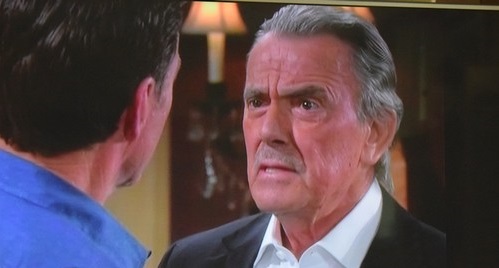 When they’re alone, Victor will order fake Jack to make Phyllis mad so she’ll sleep in another room. There’s just too much at stake and Victor doesn’t want fake Jack to blow it. Fake Jack will say no and insist that he should be treated as Victor’s equal. Victor will say that it was simple to get fake Jack out of prison in Peru because they didn’t know who he was. However, fake Jack is on the FBI’s most wanted list and Victor could easily give them updates on where to find him. Fake Jack will say that his name is Marco and he plays by a different set of rules. Victor will shout that he has a rule of his own: “Winner takes all.”

Other “Young and the Restless” spoilers hint that Avery (Jessica Collins) will return to Chicago and let Joe (Scott Elrod) know about her breakup with Dylan (Steve Burton). Avery will tell Joe her troubles and thank him for listening. Joe will lean in for a kiss and Avery will ask him what he’s doing. Avery will say she doesn’t need a rebound, but Joe will argue that they have a real connection. Avery will say that she doesn’t feel the same way and there can’t be more between them. After Avery leaves, Joe will stumble while doing physical therapy and he’ll tell his doctor that he needs to stay in rehab longer. It seems Joe would also like more time to win Avery over. Stick with Y&R to find out if Joe’s plan will work.

Back in Genoa City, Sharon (Sharon Case) will talk to Dylan about the text she sent to Avery. Dylan will give Sharon the news that Avery ended their relationship. Sharon will indicate that sending that message was selfish, especially after everything Dylan had done for her. Dylan will be furious that Sharon would choose to repay him like that. Later, Dylan will go to Sharon’s place and say that Avery was right. Dylan really does have feelings for Sharon and he doesn’t want to hurt her. Sharon will understand how he feels and they’ll kiss passionately. They’ll start taking their clothes off and head to the bedroom. The rumors say that Dylan and Sharon will become a solid couple over the next few weeks. Stay tuned to the CBS soap to watch them grow closer.