The Young and the Restless Spoilers: Is Adam Newman Innocent – Sage Responsible For Delia Abbott’s Hit and Run Murder? 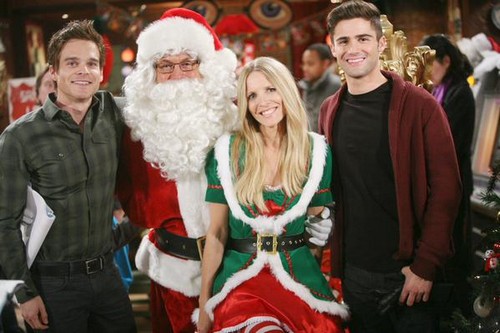 The Young and Restless spoilers are releasing the next jaw dropping Y&R spoiler. Rumors are spreading like wildfire that the ‘Angel of Mercy Sage’, is actually the hit and run driver that killed little Delia Abbott last year! The mystery woman behind Adam Newman’s miraculous new appearance and recovery has been hiding this secret from Adam for almost a year. This news will mark the end of a historic era for Y&R . From firings and recasting, this storyline has touched practically every character on The Young and the Restless and views all over the world.

On Friday, December 19th episode, Sage appears at Delia’s roadside memorial claiming her tire was flat. She also knew about the little market up the road from the crash site where little Delia left her father’s car that tragic October night.  Sage has also been highly vocal against the idea of Adam going back to his old life in fear that he will uncover the truth. The rumors of Adam clearing his name with Jack Abbott’s help has many Y&R fans trying to figure out all the twist and turns this highly anticipated storyline is making.

Another highly talked about storyline on social media, is the connection Adam and Sage have.  Could this be the reason why Sage is assisting Adam so much with his own recovery as Gabriel – is this just a huge coverup?  This way a dead Adam Newman will be forever blamed for Delia Abbot’s hit and run? We all know the news that Adam is planning on reentering Genoa City as Gabriel Bingham and having Chelsea and Connor fall in love with him.  Then when everyone is taken with the new guy in town, Gabriel reveals himself as the new and improved Adam Newman. Well that won’t work for Sage, will it?

Sage is also not happy that Adam is visiting former friends and family back in GC. She was completely outraged, when Adam approached his own father, Victor Newman, riding on the same elevator.  Another huge twist to this ever changing storyline will play out this Christmas week. Grandmother Constance reveals to Gabriel that the great and powerful Victor Newman killed his father! But we learn that in fact Victor caused Gabriel’s father’s suicide – he didn’t actually murder him.

What will this new development mean to Adam’s plan?  When Victor saw Adam briefly in the elevator, was the familiarity Victor noticed with Gabriel a reflection of the man Victor once killed?  Keep checking back here for the latest Y&R spoilers, teases and rumors!  Also check our page Soap Opera Spy on Facebook and Twitter for live updates of The Young and the Restless.