BY Heather Hughes on October 11, 2015 | Comments: one comment
Related : Soap Opera, Spoiler, Television, The Young and the Restless 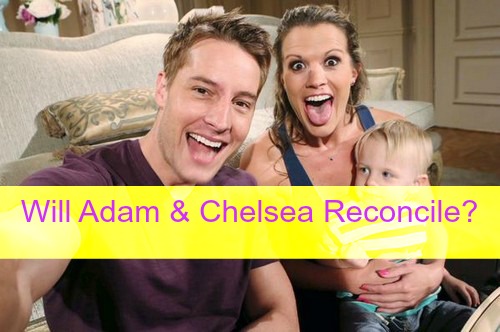 “The Young and the Restless” spoilers tease that Adam Newman (Justin Hartley) will have a change of heart. Just a couple days ago, Adam gave up and encouraged Chelsea (Melissa Claire Egan) to move on. Adam insisted Chelsea should just pretend he died in that car crash like she originally thought. However, reality started to set in and Adam realized he couldn’t leave things the way they were. With Victor’s (Eric Braeden) help, Adam will get out on bail in an effort to see Chelsea and Connor (Michael and Nolan Webb) once more.

Of course, Adam will never be satisfied with one final glimpse of his true love and young son. Like Victor recently explained to baby Christian, Newmans are fighters. That works out well for Adam since that’s exactly what he plans to do.

The latest “Young and the Restless” promo video shows Adam declaring that he’s going to fight for his family. Adam refuses to believe this is really the end of his life with Chelsea and Connor.

Nevertheless, Chelsea has been pushing aside her feelings for obvious reasons. Adam is a liar and he constantly messes with Chelsea’s emotions. The scheme with Ian (Ray Wise) was the last straw. Of course when Adam is proven to be innocent in Delia’s death, which CDL claims is going to happen, we can expect Chelsea to accept him back more readily.

In spite of the obstacles, Adam’s love for Chelsea runs deep. Perhaps the reveal of his true identity has finally helped Adam realize what he stands to lose. It’s possible that Adam has honestly learned his lesson this time, but has he learned it too late?

We’ll have to wait and see, but Y&R rumors hint that Chelsea may come around like she always does. It appears Adam might still have a shot at redemption, at least in Chelsea’s eyes.

“The Young and the Restless” spoilers say Dr. Neville will be stunned to learn that the patient he’ll be helping has been plastered all over the news. Neil will swear the doc to secrecy and hope that he can help his daughter-in-law. Stick with the CBS soap to see if Dr. Neville can be of service.

So Y&R fans, what do you think about the updates to Adam’s perspective? Are you glad Adam changed his mind about fighting for Chelsea and Connor? What about Hilary’s new neurologist? Is Neil asking for trouble by sharing his secret with someone else? Let us know what you think in the comments below and don’t forget to check CDL often for the latest “Young and the Restless” spoilers, rumors, updates and news.