The Young and the Restless (Y&R) Spoilers: Who Really Killed Delia, Is Adam Innocent – Michael Tracks Down Guilty Party? 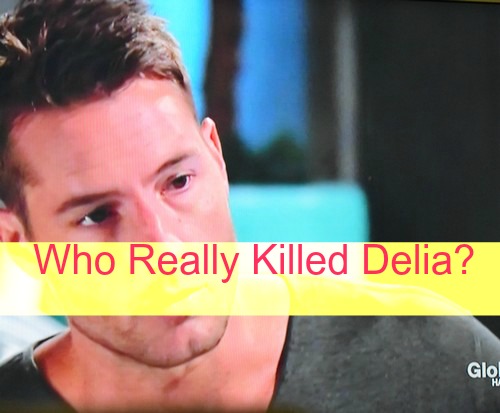 “The Young and the Restless” spoilers are in and Adam Newman (Justin Hartley) has been arrested and it looks like he will finally get his day in court. Billy Abbott (Burgess Jenkins) has agreed to allow law enforcement to prosecute him without taking the law in his own hands.

The question still looms over Genoa City with doubt about who really took Delia’s (Sophie Pollono) life on that terrible night in 2013. Adam was arrested and took responsibility for his role in Delia’s untimely death on October 7. His biggest fear was losing his family over his poor choice in hiding the evidence linking him to the incident became a reality when Chelsea (Melissa Claire Egan) left him when she discovered his part in the Paragon Project.

He recalled the incident to Paul (Doug Davidson) on Thursday, marking the first time he was ever completely transparent when speaking about that terrible night. “It was me. I did it. I came home from the hospital that night, after learning that Connor may never see again. I had no idea I hit her. I didn’t know I may have hit her until later when I saw my car. I should have come forward then, but I was scared that Chloe (Elizabeth Hendrickson) and Billy wouldn’t donate her corneas to Connor. I am not scared anymore. I deserve whatever punishment I received,” Adam said with tears in his eyes.

Ever since the doctors pronounced Delia dead at the hospital, fans have speculated who could have been the driver who killed her. Not many people believe that Adam hit her, even though he was convinced he was the one who ended her life. The way the episode was filmed, it made it difficult to figure out who was responsible for her death.

For a long time, fans speculated that Nikki (Melody Thomas Scott) could have been the one who hit her. At the time in question, Nikki was struggling with her alcoholism and was drinking way too much. The way the show edited the scene, it showed a blonde woman driving- just before Delia was struck by a car. Eventually, Nikki was cleared of any wrongdoing, but it hasn’t stopped “The Young and the Restless” fans from speculating her role in the accident.

The fact is, “Y&R” fans never completely bought that Adam was the driver. There are so many unanswered questions about who could have been truly at fault. Why was Sage and Gabriel at the memorial site that night when Adam almost died? Is it possible that Sage or the deceased Gabriel was the real killer, and their guilt led them to the site that night?

Adam took Michael (Christian LeBlanc) up on his offer to represent him. Michael believes that even though Adam claimed he was the one who took her life, he deserves representation. Once Kevin learns of his involvement in the case, it is a recipe for fireworks between the brothers. Is it possible that Michael feels that something isn’t quite as open and shut as it appears? It is rumored that Michael Baldwin will hunt down the real killer and vindicate Adam in her murder once and for all.

With November sweeps just around the corner, Adam’s trial and acquittal Delia’s death will be the focal point. The sweep preview released teased that Victor (Eric Braden) and Michael will search for a way to clear Adam of ALL criminal charges. Can Victor and Adam put their differences aside to fight for his freedom, together? Don’t forget to check back later for more juicy “The Young and the Restless” spoilers, rumors, and news!