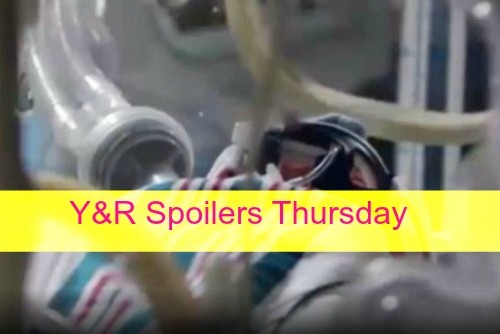 “The Young and the Restless” spoilers for Thursday, October 8, tease that the baby drama will continue for Sage (Kelly Sullivan) and Nick (Joshua Morrow). However, this time the trouble isn’t about the child’s paternity. It’s about their son’s fight for his life. When Sage wakes up in the hospital, Nick will try to quiet her fears about being arrested over the Adam (Justin Hartley) saga.

The doctor will take Nick aside and suggest that Sage should meet her child now. He might not make it. At the NICU, Sage and Nick will name the baby “Christian Andrew Newman” and hold hands as they hope for the best.

Jack (Peter Bergman) will pay Adam a visit after his recent arrest. Adam will apologize for the problems he’s caused. Adam just wanted to bring down Victor (Eric Braeden), but he ended up hurting everyone he loved in the process. Later, Michael (Christian LeBlanc) will arrive and offer to represent Adam.

At first, Adam will brush off the idea since he intends on pleading guilty. Michael will assure Adam that he can help. Adam will finally agree and ask Michael to do him a favor. Michael will hand him a phone and Adam will call Chelsea (Melissa Claire Egan) to say he’s sorry. Adam will urge Chelsea to just act like he died in the crash and try to move on.

Christine (Laralee Bell) and Paul (Doug Davidson) will grill Adam about Delia’s (Sophie Pollono) death and the events that followed. Adam will come clean about everything and insist that Billy (Burgess Jenkins) isn’t to blame for the shooting. Adam will add that they fought over the gun and it went off. Later, Billy will be questioned about the incident.

Billy will back up Adam’s story, but he’ll admit he wanted to kill him. Paul will let Billy go for now, but he’ll warn him not to leave Genoa City. Victoria (Amelia Heinle) will hear the news and ask Billy to move back in. Since they can’t get away from all this, they’ll agree living together is the next best thing.

Other “Young and the Restless” spoilers say Abby (Melissa Ordway) will be upset that Adam tricked her. Gabriel (Justin Hartley) really made Abby believe she was qualified to be COO. Abby will head to Newman Enterprises to convince Victor to give Chelsea control of her fashion line again.

After listening to what Abby has to say, Victor will approve her request. Kevin (Greg Rikaart) will show up ranting about everything Adam put Chloe (Elizabeth Hendrickson) through. Kevin will want Victor to use any power he might have over Adam to help stop the Paragon Project. Victor will decide to go see Adam in lockup.

At Chelsea’s penthouse, Jack will give her updates on Billy’s situation. Paul isn’t holding Billy or charging him with anything at this point. Chelsea will suggest that it’s a relief. Adam must’ve done something right for once. Chelsea will feel like she’ll never be able to break free from Adam. Y&R rumors hint that Adam may be somewhat redeemed in time, but it’s going to be a struggle. Stick with the CBS soap to see if Adam can make things right.