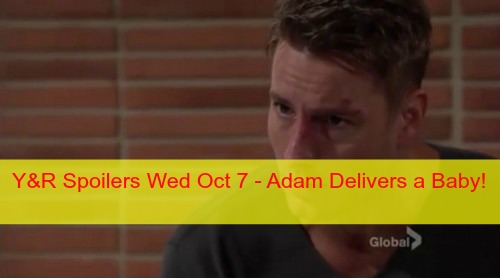 “The Young and the Restless” spoilers for Wednesday, October 7, tease that Adam (Justin Hartley) will manage to stay calm in the midst of a crisis. Sage’s (Kelly Sullivan) water will break and she won’t know if she can make it to the car. Adam will insist that he can deliver this baby and everything will be fine. After Sage gives birth to a boy, Adam will ask someone passing by to get an ambulance. At the hospital, Sage will be rushed into surgery while her baby is taken to the NICU.

At Newman Enterprises, Nick (Joshua Morrow) will worry about the threat the Paragon Project still poses. It seems it’s completely stopped their supply chain. Victor (Eric Braeden) will announce that he might have a way to take care of the virus. They’ll locate Ian’s (Ray Wise) hacker and bring him in for questioning. Unfortunately, the tech guy will declare that Adam wanted this virus to be indestructible and he made sure of it. Victor will maintain that there has to be something they can do.

Nick will learn that Sage went into early labor and he’ll head to the hospital. Stitch (Sean Carrigan) will inform Nick that it may have been brought on by stress. Nick will wonder who delivered the baby and Adam will emerge to say he did.

They’ll argue over who was responsible for stressing out Sage. As Nick heads to the NICU to see his child, Adam will congratulate him on his boy. Nick will look at the baby and instruct him to keep fighting. He’s a Newman and that’s what Newmans do.

At the police station, Nikki (Melody Thomas Scott) will give Paul (Doug Davidson) the news about Adam. Paul will be stunned to learn that Adam is still alive. After Billy (Burgess Jenkins) has a chat with Victoria (Amelia Heinle), he’ll decide he should let the justice system handle Adam this time around. Billy will let Paul know that he’s leaving it in his hands. Victor will show up demanding Adam’s arrest and later, Paul will arrive at the hospital to do just that.

Other “Young and the Restless” spoilers reveal that Devon (Bryton James) will open a ransom note as Cane (Daniel Goddard) and Lily (Christel Khalil) look on. Colin (Tristan Rogers) will spy on them as they read it. The note is supposedly from Hilary’s kidnapper and it says they’ll be in touch.

Dylan (Steve Burton) will get updates on the note and they’ll all wonder if it’s real. Devon will warn Colin that he’ll be in major trouble if he had anything to do with this, but Colin will deny any involvement.

Later, Cane will see someone in a hoodie leaving another note. This time the alleged kidnapper is demanding $1 million by tomorrow night. The money should be left in the park. At the lake house, Gwen (Nadine Nicole) will return with supplies for Hilary and assure Neil (Kristoff St. John) that Emma (Alice Greczyn) was the only one who saw her.

Neil will ask if Gwen was behind the ransom note, but she’ll imply that he’s getting too paranoid. Emma will call to tell them about the police tracking devices in the boxes Gwen swiped.

At the police station, an officer will get distracted by Dylan’s call and miss the signal from the trackers. When he looks back, the signal will be offline again. It sounds like Emma’s warning helped Gwen and Neil catch their mistake before it gave away their location.

However, they’re bound to run into more trouble down the road. Y&R rumors hint that they’ll struggle to hide this secret in the coming weeks. Stick with the CBS soap to see how long they can keep everything under wraps.