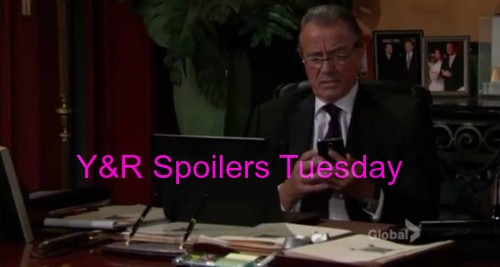 “The Young and the Restless” spoilers for Tuesday, October 6, tease that the fallout of Chelsea’s (Melissa Claire Egan) revelation will continue. Now that people know Gabriel (Justin Hartley) is actually Adam, Genoa City has been turned upside down. Adam will have an intense confrontation with Victor (Eric Braeden) at The Dive Bar. Adam will ask if Victor intends on killing him. Victor will reply that Billy (Burgess Jenkins) could take care of that for him.

Adam will offer no complaints and he’ll tell Billy to go ahead. Billy will throw a few punches until Jack (Peter Bergman) breaks them up. Jack will speak with Billy privately and give him the news that he kept Gabriel’s secret. Billy will be furious, but Jack will say it was for his own good.

Adam will head to the bar for a drink and Victor will arrive to finish their conversation. Victor will wonder where their relationship went wrong. Adam gripes that he was never good enough for his father. When Victor sued for visitation rights of Connor (Michael and Nolan Webb), it seems that was the last straw. Adam will suggest that he lost his family and he wants Victor to lose his company. Victor will vow to protect Newman Enterprises no matter what.

Phyllis (Gina Tognoni) will accuse Chelsea of telling Billy everything so he could get revenge for her. Chelsea will admit that she held onto this secret for too long, but so did Jack. Later, Phyllis will give Jack a hard time about it, but he’ll indicate that he thought it was the right thing to do. Jack will wonder if the situation with Adam will come between them. Phyllis will begin to come around and they’ll lean in for a hug.

Other “Young and the Restless” spoilers say Sage (Kelly Sullivan) will sense that Nick (Joshua Morrow) is doubting everything now. Sage will sarcastically state that she switched the paternity test results and Nick is not the father of her baby. Sage will then insist that Nick has to know he’s her child’s dad.

Victoria (Amelia Heinle) will think they should do another paternity test to be sure. Sage will snap back that they should put it to a family vote. Sage will add that she’ll move out and she doesn’t need anything from Nick. Victoria will pipe up that Michael (Christian LeBlanc) can file for an annulment.

At the park, Sage rips into Adam for what she’s going through. Sage lost both Gabriel and Nick thanks to Adam. As Sage pounds on Adam’s chest, she’ll start having extreme pain. Sage will shout that it’s too soon. It appears the Newman baby could be coming earlier than expected.

Meanwhile, Victor will track down Nick and ask for his help to protect the company. Nick will agree that they can fix what Adam is trying to destroy.

Chelsea will give Anita (Catherine Bach) updates on Gabriel’s true identity at the penthouse. Anita will ask Chelsea where Adam is and she’ll reply that it doesn’t matter. Chelsea will tell Connor that he can’t see his daddy anymore.

At Delia’s (Sophie Pollono) roadside memorial, Billy will vow to get justice. Victoria will arrive to check on him and Billy will declare that he wants Adam dead. It sounds like Billy means business. Y&R rumors hint that Billy will be on a quest for vengeance. Stick with the CBS soap to see what Billy’s next move will be.