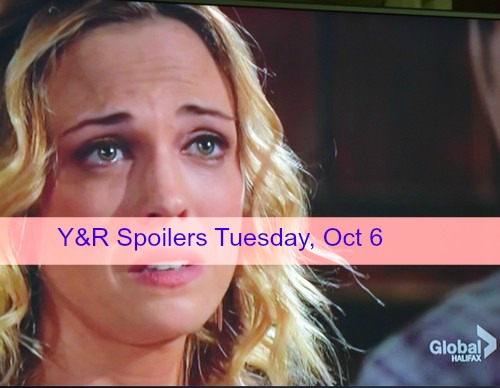 “The Young and the Restless” spoilers for Tuesday, October 6, tease that secrets will cause chaos in Genoa City. Y&R viewers know that the truth about Gabriel Bingham (Justin Hartley) is out and that means Adam Newman (Justin Hartley) will have to pay the price. According to Tuesday’s preview video, Adam will have a major confrontation with Victor (Eric Braeden) over the recent news. Adam will smugly ask if Victor wants him dead and question if he’ll be the one to kill him. Victor will hiss, “If you tempt me.”

It’s clear that Adam has a target on his back right now. Victor isn’t the only person Adam should watch out for. “The Young and the Restless” spoilers say Billy (Burgess Jenkins) will be furious that Adam is alive and in town. Billy will be even angrier when he finds out that his own brother deceived him. Jack (Peter Bergman) will admit that he knew Gabriel was Adam since he first came to Genoa City. Adam’s secret is causing trouble everywhere you turn.

Meanwhile, we’ll see the aftermath continue for Sage (Kelly Sullivan). Nick (Joshua Morrow) was stunned when he realized Sage played a huge role in helping Adam assume his new identity. However, Sage has another bomb to drop.

“The Young and the Restless” spoilers indicate that Sage will reveal she switched the paternity test results. Nick isn’t the father of Sage’s child. It looks like Connor (Michael and Nolan Webb) is getting a little brother or sister. As if Adam didn’t have enough to deal with, he’ll soon have to contend with all the baby drama.

There’s bound to be even more fallout as people start to realize the extent of Adam’s lies, not to mention Sage’s, Jack’s and even those told by Marisa (Sofia Pernas)! Now that the truth has been exposed, we should get blowup after blowup.

Adam’s issues and those for whom his true identity will affect will not be easily resolved and will influence and in some cases dominate the Genoa City landscape for months and even years to come. The rumors hint that Adam’s life will become a complete nightmare for quite a while. Pass the popcorn because this is getting good! Stick with the CBS soap for updates on the ripple effect of Adam’s big reveal.

So Y&R fans, what do you think about Victor’s threats? How far will Victor go for revenge? What about the tension between Billy and Jack? Is an Abbott family crisis emerging? Will Nick turn his back on Sage in light of the paternity revelation? Will Adam’s paternity of Sage’s child be yet another stake in Chelsea’s (Melissa Claire Egan) heart? Let us know what you think in the comments below and don’t forget to check CDL often for the latest “Young and the Restless” spoilers, rumors, updates and news.