The Young and the Restless Spoilers: Is Justin Hartley Leaving Y&R, Moving to Primetime ‘MacGyver’ – Will Adam Newman Die? 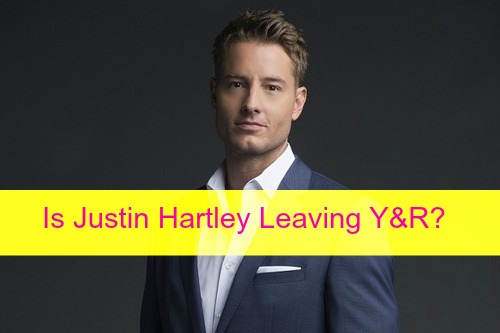 “The Young and the Restless” spoilers are in and it looks like Justin Hartley could be making a move back to primetime television and off Y&R – this time stepping into the role of “MacGyver,” CBS announced they are rebooting the wildly popular 1980s series and they’re on a hunt to find the perfect actor to take on the main character.

Soap fans all over social media believe that Justin Hartley was born to play this role but are upset – and rightfully so – because if Justin moves back to primetime TPTB would once AGAIN need to recast the role of Adam Newman – and the last transition was difficult enough.

And the L.A. CBS news affiliate is already stirring up trouble by issuing this statement – “CBS, your new MacGyver is already on the payroll. Look no further than “The Young and the Restless.” Justin Hartley who has played nefarious Adam since November 2014 is MacGyver for all the right reasons.”

“MacGyver” was a hugely popular TV show that ran from 1985-1992. It followed Angus MacGyver who used his brain and typical household items to get out of seriously complicated situations – for example defusing a bomb. It is believed by many fans that Hartley fits the look of MacGyver and would be able to look devilishly handsome while defusing a bomb.

“The Young and the Restless” spoilers indicate that there will be a massive explosion taking place during the November sweeps and four characters – yes FOUR! – will die as a result. It was speculated that the main character would be Dr. Ben “Stitch” Rayburn (Sean Carrigan) since Sean’s contract is in limbo – but could Justin Hartley be leaving the soap? Is it possible that Billy could end up killing Adam- writing off Adam Newman off the show for good?

It seems unlikely that the show would let Justin Hartley go that easily – but they let Billy Miller slip through their fingers didn’t they? Justin is the perfect Adam Newman – emotional yet conniving. Fans were divided when it came to the actor assuming the role – many felt Michael Muhney owned the role of Adam.

But Justin has stepped up and brought disgruntled fans around to accepting him as Victor Newman’s (Eric Braeden) devious son. And now after the big reveal that Gabe is really Adam how in the world could TPTB get “Y&R” fans to accept yet another recast of the character – especially since the secret about his identity is so fresh.

So far it looks like Billy Abbott (Burgess Jenkins) is contemplating taking the law into his own hands yet again. It is also possible that Adam could be sent away to serve time for his part in Delia’s death. If that’s the case, he could leave the show for a few months to film “MacGyver.”

It is looking more possible that “Y&R” could lose Justin Hartley after only having him for a year. Do you think that Justin Hartley could step into the very big shoes left by Richard Dean Anderson and pull off the role of Angus MacGyver? Do you think he would consider leaving “The Young and the Restless?”

Is it possible that Adam Newman will be the shocking major character’s death in November sweeps? Will Billy finally get justice for Delia and kill Adam Newman, once and for all? Don’t forget to back for more juicy “The Young and the Restless” spoilers, news, and updates!