The Young and the Restless (Y&R) Spoilers: Casting Call for ‘Timmy’ – Victoria’s Son Reed or Marisa’s Child with Luca or Marco? 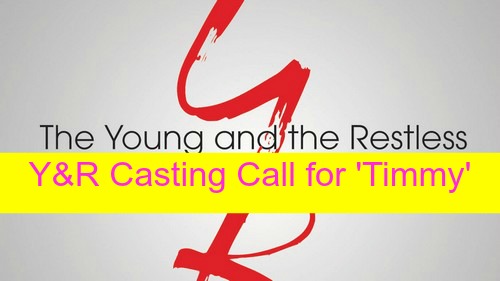 “The Young and the Restless” spoilers are in and the hit CBS daytime drama is looking forward to casting a young eight to the ten-year-old boy for a major reoccurring role on Y&R. The role, “Timmy,” was described as a Caucasian boy not older than ten years old that can handle heavy dialect. His parents are divorced, and he has bounced back and forth between his parents – in the end, he feels he may not know either parent very well. Is it possible “Timmy” could be a recast or is he an all-new character?

The description fits on several different children on “The Young and the Restless.” The first person that came to mind was Ben “Stitch Rayburn’s (Sean Carrigan) son, Max. For over a year, it was speculated that he may come to Genoa City to see his father – yet he never came.

In fact, the show rarely gave fans a glimpse of him speaking to his son in the script. If Stitch decides to renew his contract and is not killed off then the writers will need to create a storyline for him. You got to admit – if he brought his son to Genoa City from Australia that would create action-packed drama.

The most likely candidate for the casting call is Victoria Newman’s (Amelia Heinle) son, Reed. He has been off the show for a long time – and the actor who portrayed him previously, Max Page has suffered off-screen health problems. He had heart surgery last year.

Reed has rarely been seen on-screen – only mentioned every now and then by Victoria. If they plan to recast him, it seems likely that the writer could be revisiting Reed’s custody with ex-husband, J.T. Hellstrom (Thad Luckinbill).

There’s a chance – even if it is slim – that the casting call could be for an all-new character. Imagine, if Marissa (Sofia Parnas) had a child years ago with Marco (Peter Bergman), and now they want to bring the said son to Genoa City. Or possibly even Luca’s!

Imagine the fireworks it would cause between Noah (Robert Adamson) and Marisa if she failed to mention she had a kid. He would feel as if he couldn’t trust her, rightfully so. If a surprise husband shocked and spooked Noah into wanting to dump Marissa, imagine how he’ll will react with a smart mouthed pre-teen that he knew nothing about.

Clearly, no matter which character the casting call is for; it will result in big time drama. Who do you think “Timmy’s” role will be – Reed, Max or someone new? Don’t forget to check CDL back later for more juicy “The Young and the Restless” spoilers, rumors, and news!