The Young and the Restless Spoilers: Justin Hartley Co-Stars in Primetime NBC Pilot, Leaving Y&R – Is Adam’s Future in Danger? 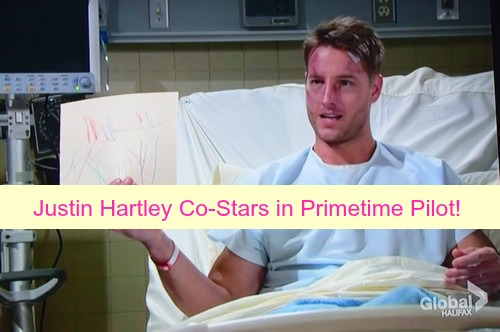 “The Young and the Restless” (Y&R) spoilers tease that Justin Hartley could be leaving the CBS soap opera as Adam Newman if things work out on a new project for the brilliant actor. According to The Hollywood Reporter, Hartley will star in an NBC primetime unnamed drama plot with the plot centering around a group of people that share the same birthday.

The pilot will be an hour-long dramedy that has a unique storyline centering around three people that share the same birthday. Rebecca [portrayed by Mandy Moore] is pregnant with triplets and just moved into her own home with her husband. Jack, Rebecca’s spouse, [Milo Ventimiglia] is an easy-going man who is very excited he’s about to become a father. Kevin [Justin Hartley] will play a bored bachelor who is a success TV actor who wants more out of his life. The pilot is rumored to be set to start filming any day now.

The one thing about the pilot that is in the air is whether TPTB would allow Justin to film a primetime show and the soap at the same time. If you remember, Billy Miller was forced to resign as Billy Abbott because he wanted to branch out to other roles during his down time.

Jill Farren Phelps, executive producer of “Y&R” would not allow Miller to accept the small part in “American Sniper” while working with the CBS soap opera. Billy Miller correctly told her essentially “Hasta La Vista baby “and took up residence in Port Charles. Is it possible that Justin Hartley could be forced to make such a decision?

It seems highly unlikely that an actor of Justin Hartley’s experience and talent and resume would assign himself to be content with working EXCLUSIVELY on a daytime drama for the rest of his career.

Before landing on “The Young and the Restless,”Justin was already a successful primetime actor. Is it possible that JFP will force his hand and make him choose between a regular check with “Y&R” as Adam Newman and his dreams of bigger stardom? Hopefully Y&R’s loss of Billy Miller taught TPTB at Y&R a lesson and they won’t drive Justin away!

As of right now, Justin Hartley will be sticking around on “The Young and the Restless.” By mid-spring, the pilot will be filmed, and projections about the probable outcome of the show will begin – as will contract talks for the new show, very probably.

It is looking more plausible that this could be Justin Hartley’s last year as Adam Newman. Do you think TPTB would allow Hartley to film both a primetime show and “The Young and the Restless” at the same time? Will they have a choice? Fans love Justin and his portrayal of Adam Newman. Don’t forget to come back later for more CDL juicy “The Young and the Restless” spoilers, rumors, and news!