BY Heather Hughes on December 27, 2015 | Comments: one comment
Related : Soap Opera, Spoiler, Television, The Young and the Restless 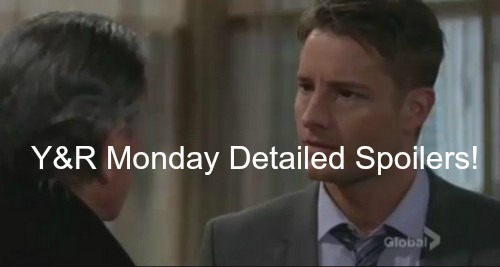 “The Young and the Restless” spoilers for Monday, December 28, reveal that wedding preparations will continue for Stitch (Sean Carrigan) and Abby’s (Melissa Ordway) wedding. Adam (Justin Hartley) will tell Chelsea (Melissa Claire Egan) that he isn’t sure she should’ve agreed to design Abby’s wedding dress. Abby could turn into a real “Bridezilla.”

Chelsea will change the subject to the baby question she raised at the Christmas bash. Chelsea will wonder if Adam has given it any thought. Adam will suggest that having another child is a big decision. After Chelsea is gone, Adam will see Sage (Kelly Sullivan) and Nick (Joshua Morrow) coming out of the penthouse next door. They’ll stop to make small talk with Adam about the party.

After Nick leaves, Sage will say he’s still being insensitive about her grief. Adam will have an outburst about Christian and all the Christmases he’ll miss. Sage will be shocked by Adam’s passionate response and she’ll tell him to stop. Sage will admit she’s still struggling to get through all of this.

At the athletic club, Stitch and Abby will come in to find Billy (Burgess Jenkins) sitting with Victoria (Amelia Heinle). Stitch will urge Billy to leave, but Victoria will let him know that it’s fine. Billy will apologize for the way he acted at The Underground.

Stitch will shake Billy’s hand as they put the ordeal behind them. Talk will turn to Stitch’s son. Abby will believe Jenna is to blame for coming between Stitch and Max.

Stitch will call Jenna and beg her to reach some sort of agreement. Stitch will want Max at his wedding. Meanwhile, Abby will pick out the wedding dress she wants with Chelsea and Victoria. Abby will say she can’t wait to get married and start her new life with Stitch.

At Crimson Lights, Mariah (Camryn Grimes) and Faith (Alyvia Alyn Lind) will give Dylan (Steve Burton) updates on their trip to the movies. Dylan will mention that Sharon (Sharon Case) is chatting with Dr. Anderson (Elizabeth Bogush).

On the patio, Sharon will tell Dr. Anderson about Nick and Sage being together. Dr. Anderson won’t be pleased by the news that they’re disregarding her recommendation.

Sharon will go inside to find a very suspicious Mariah. Sharon will think Mariah is just worried because of her experience with Ian Ward (Ray Wise). Mariah will insist that something is off about the pushy doc.

Nick will see Dr. Anderson and she’ll warn him that Sage could be her next patient if she’s not careful. Dr. Anderson will feel that Sage still needs time alone to grieve.

Back inside, Stitch will have a conversation with Dylan. When Stitch gets a call from Jenna, he’ll learn that Max won’t be coming to the wedding. Stitch will shout that Jenna is being vindictive and she’ll hang up.

Dylan will feel bad about what Stitch is going through. Dylan will suggest that if he ever had difficulties with Sharon, he wouldn’t let the trouble keep him from Sully.

Later, Dylan and Sharon will discuss the issue. They promise that Sully will always be in both of their lives. Stitch will meet up with Abby at the athletic club. He’ll point out that Jenna wouldn’t budge. However, Stitch will assure Abby that he won’t let the disappointment affect their wedding.

At the police station, Billy will pressure Kevin (Greg Rikaart) to let him in on his new business venture. Kevin won’t like the idea, but Billy will insist that he needs to prove he’s getting his life together.

Kevin will say that he keeps reaching out to the female hacker, but she won’t get back in touch with him. After Kevin leaves, Mariah will show up and Billy will wonder what she knows about this hacker.

At Newman Enterprises, Victor (Eric Braeden) will argue with Luca (Miles Gaston Villanueva) about expansion plans. Victor will think his vote is the only one that counts. Luca will reply that Victor is forgetting who he’s talking to. Later, Victor will call Noah (Robert Adamson) into his office and suggest that they should let Luca think he has a say in the company for now.

Noah will assure Victor that he’ll back him up on everything. Victor will think they’ll have to make sacrifices. Noah will ask if that includes Marisa (Sofia Pernas). Victor will believe Noah needs to make his family his top priority.

Afterwards, Marisa will tell Noah that she’s worried about him. The Santori family is extremely dangerous. Noah will brush off Marisa’s fears. Luca will arrive and gloat about being Marisa’s husband.

Other “Young and the Restless” spoilers reveal that Victor will have an interesting encounter with Adam and Sage. When he finds them together at the penthouse, he’ll make some comments that seem like veiled threats.

Sage will ask Victor if he’s telling her to steer clear of both Nick and Adam now. Victor will act confused and tell Sage that he just wants her to be happy.

Once Sage exits, Victor will mention an issue with Noah and the Santoris. Victor will hint that Adam needs to stop cozying up to Sage. Adam will rant about Victor’s need to control everything around him. Victor will remind Adam that he knows the truth about Christian.

Will Adam eventually push Victor one step too far, or has The Moustache already triggered Adam to revolt with this latest threat to expose Christian’s paternity? Y&R viewers will be waiting to see when the paternity secret will finally come out. Stick with the CBS soap to see how things will turn out for Adam.